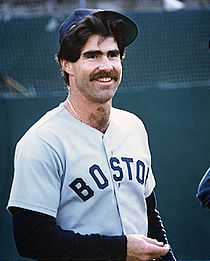 Buckner with the Boston Red Sox

William Joseph Buckner (December 14, 1949 – May 27, 2019) was an American professional baseball player. He played as a first baseman in Major League Baseball (MLB) between 1969 and 1990. During his career, he played for the Los Angeles Dodgers, Chicago Cubs, Boston Red Sox, California Angels and Kansas City Royals. He won a batting title in 1980. He also represented the Cubs at the All-Star Game in 1981.

Buckner famously made an error fielding a ground ball in the tenth inning when playing for the the Red Sox that ended Game 6 of the 1986 World Series against the New York Mets. The moment has since become a very famous event in baseball history.

Buckner was born in Vallejo, California. He was married to Jody and had three children.

All content from Kiddle encyclopedia articles (including the article images and facts) can be freely used under Attribution-ShareAlike license, unless stated otherwise. Cite this article:
Bill Buckner Facts for Kids. Kiddle Encyclopedia.