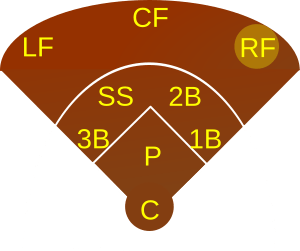 The position of the right fielder

A right fielder, abbreviated RF, is the outfielder in baseball or softball who plays defense in right field. Right field is the area of the outfield to the right of a person standing at home plate and facing towards the pitcher's mound. In the numbering system used to record defensive plays, the right fielder is assigned the number 9. 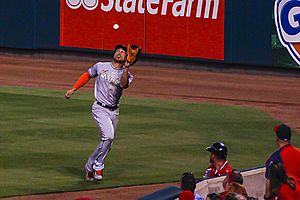 Right fielder Giancarlo Stanton of the New York Yankees, seen here during his tenure with the Miami Marlins, signed the richest contract in sports history in 2014.

Outfielders must cover large distances, so speed, instincts and quickness to react to the ball are key. They must be able to catch fly balls above their head and on the run, as well as prevent balls hit down the right field foul line from getting past them. Being situated 250–300 feet from home plate, they must be able to throw the ball accurately over a long distance to be effective. Of all outfield positions, the right fielder often has the strongest arm, because they are the farthest from third base.

The right fielder tends to be a stronger offensive player than defensive, as right-handed batters, which are more common than left-handed ones, tend to pull the ball to left field, especially in Little League. Right field has developed a reputation in Little League as being a position where less talented players can be "hidden" without damaging a team's defense in any significant way. Unlike the major league level, where hitters have the ability to drive the ball into the outfield in all directions, most little league batters are unable to hit the ball out of the infield with any regularity. Additionally, since most batters are right-handed, the left fielder (and to some extent the center fielder) will have far more opportunities to make a play than the right fielder.

All content from Kiddle encyclopedia articles (including the article images and facts) can be freely used under Attribution-ShareAlike license, unless stated otherwise. Cite this article:
Right fielder Facts for Kids. Kiddle Encyclopedia.