He played 18 seasons in Major League Baseball (MLB). He played right field for the Pittsburgh Pirates from 1955 through 1972.

Clemente was involved in charity work in Latin American and Caribbean countries during the off-seasons, often delivering baseball equipment and food to those in need. He also fought for Puerto Rican equality.

He was inducted into the National Baseball Hall of Fame in 1973, becoming both the first Latin American and Caribbean player to be enshrined.

Clemente's career was cut short by his death On December 31, 1972 in a plane crash off the coast of his homeland of Puerto Rico. The flight was planned to deliver emergency supplies to victims of an earthquake in Nicaragua.

Roberto was born in Barrio San Antón, Carolina, Puerto Rico, to Melchor Clemente and Luisa Walker. He was the youngest of seven children. During Clemente's childhood, his father worked as a foreman for sugar cane crops located in the municipality, located in the northeastern part of the island. Because the family's resources were limited, Clemente and his brothers worked alongside his father in the fields, loading and unloading trucks. As a youth, Clemente was a track and field star and Olympic hopeful before deciding to turn his attention to baseball.

Clemente had first showed interest in baseball early in life and often played against neighboring barrios. He attended Julio Vizcarrondo Coronado High School in Carolina. During his first year in high school, he was recruited by Roberto Marín to play softball with the Sello Rojo team after he was seen playing baseball in barrio San Antón. He was with the team two years as a shortstop.

Clemente joined Puerto Rico's amateur league when he was 16 years old, playing for the Ferdinand Juncos team, which represented the municipality of Juncos. 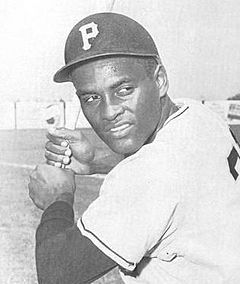 Clemente was a right fielder. His Major League Debut Was In Pittsburgh Pirates.

He was an All-Star for 13 seasons, playing in 15 All-Star Games.

His batting average was over .300 for 13 seasons and he had 3,000 hits during his major league career.

He also was a two-time World Series champion.

Clemente did a lot of charity work, especially in Latin American countries; as noted above, he died on a charity mission to Latin America. Each year the MLB gives the Roberto Clemente Award. This award is for the player who best follows Clemente's example with charity work.

In 1973, Clemente was awarded the Congressional Gold Medal and the first Presidential Citizens Medal. On August 17, 1984 the United States Postal Service issued a postage stamp honoring Clemente. This was the day before what would have been his 50th birthday.

All content from Kiddle encyclopedia articles (including the article images and facts) can be freely used under Attribution-ShareAlike license, unless stated otherwise. Cite this article:
Roberto Clemente Facts for Kids. Kiddle Encyclopedia.