Structurally, the government is composed of three branches: the executive, legislative, and judicial branch. The executive branch is headed by the governor, currently Pedro Pierluisi, who is also the head of government. The legislative branch consists of a bicameral legislature, namely the Legislative Assembly, composed by the Senate as its upper house and by the House of Representatives as its lower house. The governor and legislators are elected by popular vote every four years.

The judicial branch is headed by the Chief Justice of the Supreme Court of Puerto Rico, currently Maite Oronoz Rodríguez. The legal system is a mix of the civil law and the common law systems. Members of the judicial branch are appointed by the governor with advice and consent from the Senate.

Puerto Rico was ceded to the United States by Spain at the end of the Spanish–American War by the Treaty of Paris of 1898. The Foraker Act of 1900 provided for an organization of the civilian government. The Jones–Shafroth Act of 1917 re-organized the government.

The United States government approved an amended version by Pub.L. 82-447, 66 Stat. 327, enacted July 3, 1952, and on July 10, 1952 the Constitutional Convention of Puerto Rico reconvened and approved the conditions established by Pub.L. 82-447. On July 25, 1952, Governor Luis Muñoz Marín proclaimed that the Constitution of Puerto Rico was in effect.

Main page: Executive branch of the government of Puerto Rico

The executive branch is responsible for administering public resources, as well as providing all necessary public services to the Puerto Rican general public. It is by far the largest branch in the government as well as the largest employer in Puerto Rico with more than 150,000 workers.

The head of government is the Governor of Puerto Rico, who is elected every four years in a general election. The position is similar in nature, responsibility, and power as those of a governor of a U.S. state. The position of Governor has the overall responsibility of the state of the commonwealth, equivalent to the state of the union in the U.S. The official residence of the governor is La Fortaleza, the oldest executive mansion in continuous use in the Western Hemisphere.

The Governor has the authority to nominate agency heads, trial and appellate judges, as well as Supreme Court justices and directors of public corporations, although these must be confirmed by the Senate and, in a handful of cases, the House, as well.. Similar to a U.S. State, the Governor has authority over the Puerto Rico National Guard.

Although Puerto Rico does not have the position of Lieutenant Governor, sections 7 and 8 of the Constitution empower the Secretary of the Puerto Rico State Department to act as Acting Governor, should the governor be absent from Puerto Rico, become temporarily disabled or unable to discharge his/her duties, and as Governor for the remainder of the term should a permanent vacancy occur.

Puerto Rico does not have a post for lieutenant governor but the Chief of Staff performs a similar role as the officer charged with managing and overseeing all executive agencies. The Chief of Staff, however, is not empowered to act as acting governor—the Constitution of Puerto Rico and Puerto Rican law establishes a governmental line of succession starting with the Secretary of State.

Article IV of the Constitution of Puerto Rico establishes that the Governor shall be assisted by Secretaries who shall collectively constitute the Governor's advisory council and be designated as the Council of Secretaries although it's mostly referred to as the Cabinet.

All Cabinet members are nominated by the Governor and then presented to the Senate for advise and consent by a simple majority. If they are approved, they are sworn in and then begin their duties. All members receive the title of Secretary.

Members of the Cabinet serve at the pleasure of the Governor, who may dismiss them or reappoint them (to other posts) at will.

Main page: Executive departments of the government of Puerto Rico 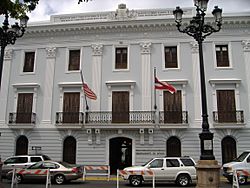 The main offices of the Puerto Rico Department of State in front of Plaza de Armas in Old San Juan.

The day-to-day enforcement and administration of laws is delegated by the Governor to 16 executive departments created by the Constitution or by statute to deal with specific areas of government. The heads of the departments, chosen by the governor and approved by the Senate (with the exception of the Secretary of State, who requires Senate and House confirmation), form a council of advisers generally known as the Governor's Cabinet.

The Constitution provides for the creation of at least 8 departments: Departments of State, Justice, Education, Health, Treasury, Labor, Agriculture, Commerce, and Public Works. However, due to the increase in population, economy, and public needs over the years, the Puerto Rico government has expanded the executive branch by establishing additional executive departments not specified in the Constitution. These additional departments are established by public law or so-called "reorganization plans", as approved by the legislative assembly.

The title of Secretary is given to the heads of the executive departments, whose position is also created by statute. Cabinet member is another title primarily given by the media and the public, though it is considered unofficial. All cabinet-level Secretaries are first nominated by the Governor and are confirmed by the legislative assembly.

Each department has different divisions, agencies, bureaus, offices, and services, each with specific duties, in order to provide the necessary services to the general public across the island.

Puerto Rico has also established several government-owned corporations in order to provide basic and public services to its citizens, including electricity, water, transportation, and education, among others. These are separate legal entities from the Commonwealth, but the government owns virtually all of these corporations’s stock. Each corporation is headed by an Executive Director who is appointed by the corporations’ Board of Directors. The directors are nominated by the Governor and confirmed by the state legislative assembly.

Although government-owned corporations are separate from the commonwealth government, who generate their income and expenses independently, several of those have faced financial troubles, and have constantly relied on so called “bail-outs” from the commonwealth to offset recurring losses and deficits. The most famous of these cases was the Puerto Rico Aqueduct and Sewer Authority (PRASA), which faced annual recurring losses in the ranges of hundreds of millions of dollars and required several bail-outs to avoid bankruptcy. While some have mistakenly referred to these bail-outs as loans, they are in fact transfers of equity because the commonwealth does not expect repayment in the future.

Government-owned corporations have the advantage of issuing separate securities, such as bonds, in the trading market to obtain capital. This is done so that the corporations may finance public works and improvements without having to rely on the commonwealth’s credit. However, as in the case of PRASA, some public corporations have had serious financial difficulties which excluded them from the bond market, and have had to resort to commonwealth bonds to make capital additions and improvements.

All content from Kiddle encyclopedia articles (including the article images and facts) can be freely used under Attribution-ShareAlike license, unless stated otherwise. Cite this article:
Government of Puerto Rico Facts for Kids. Kiddle Encyclopedia.