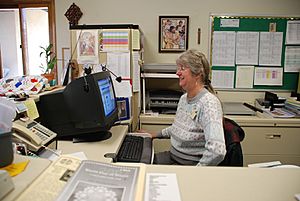 The functions of a personal assistant may be entirely carried out to assist one other employee or may be for the benefit of more than one. In other situations, a secretary is an officer of a society or organization who deals with correspondence, admits new members, and organizes official meetings and events. Some high-level secretaries, administrative assistants, or executive assistants in the associate, junior, mid-senior, and senior level pay bands or those in an entry-level position that requires specialized knowledge acquired through a bachelor's degree or even a master's degree in a field pertinent to the organization's industry are specialized secretaries who generally assist senior executives and/or actively participate in the work of the organization such has having a hands-on involvement on the production of deliverables. Some non-secretarial positions such as legislative assistants, paralegals, judicial law clerks, clerks of the court, medical assistants, and medical scribes that require bachelor's, master's, or doctoral degrees to practice, have at times taken up duties identical to that of specialized secretaries and vice versa where specialized secretaries have taken up the tedious and repetitive research and recordkeeping tasks of persons they assist.

A secretary, also known as a personal assistant (PA) or administrative assistant, can have many administrative duties. The title "secretary" is not used as often as in decades past, and responsibilities have evolved in response to the technological age, requiring knowledge in software such as the Microsoft Office suite of applications. The duties may vary according to the nature and size of the company or organization, and might include managing budgets, bookkeeping, attending telephone calls, handling visitors, maintaining websites, travel arrangements, and preparing expense reports. Secretaries might also manage all the administrative details of running a high-level conference or meeting and be responsible for arranging the catering for a lunch meeting. Often executives will ask their assistant to take the minutes at meetings and prepare meeting documents for review. In addition to the minutes, the secretary may be responsible for keeping all of the official records of a company or organization. A secretary is also regarded as an "office manager".

The term is derived from the Latin word secernere, "to distinguish" or "to set apart", the passive participle (secretum) meaning "having been set apart", with the eventual connotation of something private or confidential, as with the English word secret. A secretarius was a person, therefore, overseeing business confidentially, usually for a powerful individual (a king, pope, etc.). As the duties of a modern secretary often still include the handling of confidential information, the literal meaning of their title still holds true.

From the Renaissance until the late 19th century, men involved in the daily correspondence and the activities of the powerful had assumed the title of secretary.

With time, like many titles, the term was applied to more and varied functions, leading to compound titles to specify various secretarial work better, like general secretary or financial secretary. Just "secretary" remained in use either as an abbreviation when clear in the context or for relatively modest positions such as administrative assistant of the officer(s) in charge, either individually or as member of a secretariat. As such less influential posts became more feminine and common with the multiplication of bureaucracies in the public and private sectors, new words were also coined to describe them, such as personal assistant.

In the 1840s and 1850s, commercial schools were emerging to train male and female students the skills needed to work in a clerical position. In 1870, Sir Isaac Pitman founded a school where students could qualify as shorthand writers to "professional and commercial men". Originally, this school was only for male students. In 1871, there were more than 150 such schools operating in the United States, a number that grew to as many as 500 by the 1890s.

In the 1880s, with the invention of the typewriter, more women began to enter the field and during the upcoming years, especially since World War I, the role of secretary has been primarily associated with women. By the 1930s, fewer men were entering the field of secretaries.

By the mid-20th century, the need for secretaries was great and offices and organizations featured large secretarial pools. In some cases the demand was great enough to spur secretaries being recruited from overseas; in particular, there was often a steady demand for young British women to come to the U.S. and fill temporary or permanent secretarial positions. Several organizations were created to assist secretaries from foreign lands, including the Society of International Secretaries and the Association of British Secretaries in America.

In 1952, Mary Barrett, president of the National Secretaries Association, C. King Woodbridge, president of Dictaphone Corporation, and American businessman Harry F. Klemfuss created a special Secretary's Day holiday, to recognize the hard work of the staff in the office. The holiday caught on, and during the fourth week of April is now celebrated in offices all over the world. It has been renamed "Administrative Professional's Week" to highlight the increased responsibility of today's secretary and other administrative workers, and to avoid embarrassment to those who believe that "secretary" refers only to women or to unskilled workers.

In a business, many job descriptions overlap. However, while administrative assistant is a generic term, not necessarily implying directly working for a superior, a secretary is usually the key person for all administrative tasks, and often referred to as the "gate keeper". Other titles describing jobs similar to or overlapping those of the traditional secretary are Office Coordinator, Executive Assistant, Office Manager and Administrative Professional.

This should be distinguished from the Company secretary, a senior role within a company responsible for compliance with statutory and regulatory requirements.

In the United States, a variety of skills and adaptability to new situations is necessary. As such, a four-year bachelor's degree is often preferred and a two-year associate degree is usually a requirement, in any field of study unless specified by employer to comply with education requirements within their given industry, although work experience can substitute education if the position does not require specialized knowledge in a specific fields of study pertinent to the employer's industry or division's role within the organization. Another option taken with or without higher education is to get a professional certification from a national association that self-regulates the secretarial and administrative assistance industry, in which a professional certification may substitute higher education if the person does not have a bachelor's degree or an associate degree, or in order to substitute work experience for a person with a higher education degree but with limited experience in an administrative support position.

An executive assistant may, from time to time, act as proxy for the executives, representing him/her/them in meetings or communications and project managing the production of reports or other deliverables in the absence of the executive. An executive assistant differs from an administrative assistant (a job which is often part of the career path of an executive assistant) in that they are expected to possess a higher degree of business acumen, be able to manage projects, as well as have the ability to influence others on behalf of the executive. In the past, executive assistants were required to have a high school diploma only, but increasingly jobs are requiring a bachelor's degree of any field of study or when compiling with educational requirements within their given industry, may require specialized knowledge in a specific fields of study through a bachelor's degree pertinent to the employer's industry or division's role within the organization.

The Secretary of Defense also has a lieutenant general or vice admiral as his/her senior military assistant.

Like their civilian counterparts, EAs are also a resource in decision-making, policy setting, and will have leadership oversight of the entire military and civilian staff supporting the civilian official, general officer, or flag officer. EAs are often interchangeable with other senior military officers of equivalent rank holding the title of chief of staff in other service organizations headed by a flag officer or general officer. In the case of unified combatant commands and service major commands, the Chief of Staff is often a general officer or flag officer himself/herself, typically at the 1-star or 2-star level, but he or she should not be confused with the 4-star officers holding the title of Chief of Staff of the Army or Chief of Staff of the Air Force.

All content from Kiddle encyclopedia articles (including the article images and facts) can be freely used under Attribution-ShareAlike license, unless stated otherwise. Cite this article:
Secretary Facts for Kids. Kiddle Encyclopedia.