Joseph Robinette Biden Jr., known as Joe Biden ( born November 20, 1942) is an American politician. He is the 46th and current President of the United States since 2021. Biden was the 47th Vice President of the United States from 2009 through 2017 during the Barack Obama presidency. He is a member of the Democratic Party and is from Wilmington, Delaware. Before becoming Vice President, he was a U.S. Senator from Delaware from 1973 to 2009. He had served in the Senate longer than any other Vice President.

He tried to become the Democratic candidate for President in 1988 and 2008, but did not win. He ran again in 2020. During the 2008 election, then-Senator Barack Obama picked him to be his running mate. He is a Roman Catholic. Biden has received several awards. He has five honorary doctorates, including one from his alma mater and one from where he has taught law. He has also earned the "Best of Congress Award" and an award from the Pakistani government.

After finishing his second term as vice president, Biden began working at the University of Pennsylvania. On April 25, 2019, Biden launched his presidential campaign for the 2020 election. On April 8, 2020, Biden became the presumptive nominee for the Democratic nomination after Bernie Sanders ended his campaign.

On November 7, he beat President Donald Trump and became the President-elect of the United States.

Biden, aged 78, will be the oldest person to ever become president.

Joe Biden as a child at age ten

Joe Biden was born on November 20, 1942 at St. Mary's Keller Memorial Hospital in Scranton, Pennsylvania to a family of Irish Catholics. His father, Joe Biden Sr., was a businessman. When he was young, his family moved to Wilmington, Delaware. In high school, Biden played football and baseball, but he was not a very good student. Biden attended college at the University of Delaware and Syracuse University. He did not have to fight in the Vietnam War because he was going to college and had asthma as a child.

For many years, Biden was a U.S. Senator from Delaware. Biden was elected to the U.S. Senate in 1972 when he was 29 years old. His election was somewhat of a surprise. The other candidate, J. Caleb Boggs, had more experience and more money to spend on his campaign. He is one of the youngest people to become a U.S. Senator, because he was only two months older than the minimum age, 30, required to be one. (While he was 29 during the election, he turned 30 before he became a senator.)

Biden was re-elected to the Senate six times. Later in his time in the Senate, Biden served as chair of the Senate Foreign Relations Committee and the Senate Judiciary Committee. The Foreign Relations committee deals with American issues in other countries. When Biden was chair, the committee dealt with the 1991 Gulf War, the 2003 War in Iraq, and several treaties. The Judiciary Committee dealt with the choice of Clarence Thomas, Robert Bork, and others for the Supreme Court (SCOTUS). Biden thought that Thomas and Bork should not be on the Court. Though U.S. senators work in Washington, DC, Biden took the train home to Delaware every night.

Running for President and Vice President

Biden ran for President three times, in 1988, 2008 and 2020. The first time he was viewed as a good choice early on, but quit after it was discovered he gave a speech that was copied from Neil Kinnock, a British politician. 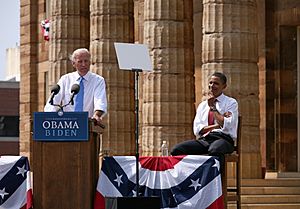 Biden campaigns with then Senator Barack Obama in 2008

Biden tried again to get the Democratic Party's nomination in the 2008 presidential election. He ran mostly on foreign issues, especially getting U.S. troops out of Iraq. Many thought of him as a good choice for Secretary of State. He stopped his campaign on January 3, 2008 after he did not get many votes in the Iowa caucus. However, he later became Barack Obama's pick for Vice President due to what he knew about Iraq and because the working class liked him.

When Biden was running for President, he criticized Obama, talking about his lack of experience, but later he supported Obama to become president. His opponent as Vice President was Sarah Palin, who had less experience but was seen as more interesting by the media. Before the election, there were debates between the different candidates running for president or vice president. In the debate between Biden and Palin, many people believed that he knew more about running America than Palin did. When Obama was elected President on November 4, 2008, Biden was elected Vice President. 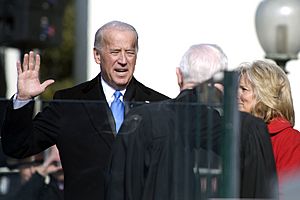 Biden's main role was as an advisor to Obama, mostly on issues of foreign policy and the economy. Obama has asked for Biden's input on most of his major decisions, such as who to put in his Cabinet and how to fight the War in Afghanistan. Obama has put him in charge of groups to deal with the problems of the working class, as well as to watch the money in his stimulus bill. Biden has also traveled to the Middle East several times on behalf of Obama and the U.S. while Vice President. In 2011, Biden lead talks on the budget and the debt. On November 6, 2012, Biden was re-elected for a second term as Vice President along with President Barack Obama.

After winning the election, Biden served the Vice Presidency until January 20, 2017.

In August 2015, Biden said that he was looking for a possible chance of running for President again in the 2016 U.S. election. Biden formed a PAC for his possible run. On October 21, speaking from a podium in the Rose Garden with his wife and President Obama by his side, Biden announced his decision not to enter the race for the Democratic nomination for the presidency for the 2016 election. 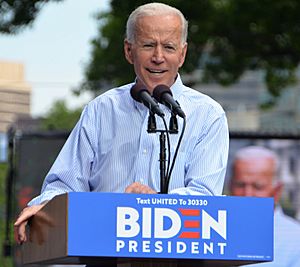 Biden at his first presidential campaign rally in Philadelphia, Pennsylvania, May 2019

"My Vice President will be a woman." - Biden 2020 campaign poster supporting his running mate Kamala Harris

During a tour of the U.S. Senate with reporters before leaving office, on December 5, 2016, Biden said that a presidential bid was possible in the 2020 presidential election, after leaving office as Vice President. Biden will be 77 years old on election day and 78 on Inauguration Day in 2021. While on the The Late Show with Stephen Colbert on December 7, in which he stated "never say never" about running for President in 2020, while also admitting he did not see a scenario in which he would run for office again. On January 13, 2017, exactly one week before Donald Trump took office, that he would not run. However, four days later, on January 17, he took the statement back, saying "I'll run if I can walk."

Biden was mentioned by many news media as a potential candidate for the 2020 Democratic nomination. In March 2019, he said he may run.

In April 2020, Biden became the only candidate in the primary making him the presumptive nominee for the nomination. At first, he lost the first three primary contests to Senator Bernie Sanders. After winning the South Carolina primary, he gained traction and won most of the Super Tuesday races.

Biden promised when elected he would protect Roe v. Wade decision, create a public option for health insurance, decriminalization of recreational cannabis, passing the Equality Act, free community college, and a $1.7 trillion climate plan supporting the Green New Deal. He supports regulation instead of a complete ban on fracking.

As of September 15, 2020, FiveThirtyEight's statistical model predicted that Biden had a 76% chance to defeat Donald Trump.

President of the United States

Biden was elected the 46th President of the United States in November 2020, defeating the incumbent Donald Trump, the first sitting president to lose re-election since George H. W. Bush in 1992.

He became the second non-incumbent vice president to be elected president, and the first Democrat to do so. He is also expected to become the oldest president at the time of inauguration, as well as the first president from Delaware.

He is the oldest president at the time of inauguration, as well as the first president from Delaware.

An early photo of Jill and Joe Biden

While in college, he married his first wife, Nelia Hunter. They had three children, two sons (Beau and Robert) and a daughter (Naomi). After college, he became a lawyer and served on a County Council, a group of people who run a county. In 1972, Nelia and Naomi were killed in a car accident, and Beau and Robert were hurt very badly. Both survived the accident. Beau was the Attorney General in Delaware until January 2015 and served as a soldier in Iraq. Beau died from brain cancer on May 30, 2015 in Bethesda, Maryland. He was 46. Biden thought of resigning as Vice President because of his son's death.

Biden married his second wife, Jill Tracy Jacobs Biden, in 1977. She is a teacher and the former Second Lady of the United States. In 1981, they had a daughter, Ashley, who is now a social worker. In 1988, Biden suffered from bleeding in his brain and needed brain surgery twice. Because of what he saw in his family and neighborhood, Biden does not drink alcohol.

Joe Biden has two German Shepherds, Champ and Major. Major was a rescue dog. In November 2020, while playing with his dogs he suffered a stress fracture in his foot and was hospitalized.

In late 2020, President-elect Joe Biden received his first dose of the Pfizer COVID-19 vaccine at the Christiana Hospital in his home state of Delaware. He later returned for his second dose at the hospital in early 2021. 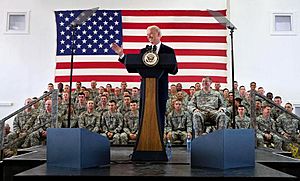 Biden got the Chancellor Medal from his alma mater, Syracuse University, in 1980. In 2005, he got the George Arents Pioneer Medal—Syracuse's highest alumni award—"for excellence in public affairs."

In 2008, Biden got the Best of Congress Award, for "improving the American quality of life through family-friendly work policies," from Working Mother magazine. Also in 2008, Biden shared with fellow Senator Richard Lugar the Hilal-i-Pakistan award from the Government of Pakistan, "in recognition of their consistent support for Pakistan." In 2009, Biden got The Golden Medal of Freedom award from Kosovo, that region's highest award, for his vocal support for their independence in the late 1990s.

On December 10, 2020, Biden and Harris were jointly named Time Person of the Year.

All content from Kiddle encyclopedia articles (including the article images and facts) can be freely used under Attribution-ShareAlike license, unless stated otherwise. Cite this article:
Joe Biden Facts for Kids. Kiddle Encyclopedia.