New Castle County is the northernmost of the three counties of the U.S. state of Delaware. As of the 2020 census, the population was 570,719, making it the most populous county in Delaware, with just under 60% of the state's population of 989,948. The county seat is Wilmington, which is also the state's most populous city.

New Castle County has the highest population and population density of any Delaware county, and it is the smallest county in the state by area. It has more people than the other two counties, Kent and Sussex, combined. It is also the most economically developed of the three.

New Castle County is home to two minor league sports teams: the Wilmington Blue Rocks (baseball) and the Delaware Blue Coats (basketball), both of which play in Wilmington. It also has a professional auto racing track in New Castle known as Airport Speedway, with races on Saturday nights throughout the summer.

The first permanent European settlement on Delaware soil was Fort Christina, resulting from Peter Minuit's 1638 expedition on the Swedish vessels Fogel Grip and Kalmar Nyckel. The Swedes laid out the town at the site of modern-day Wilmington. They contracted with the Lenape Native Americans for land of Old Cape Henlopen north to Sankikans (Trenton Falls), and inland as far as they desired. However, a dispute ensued between the Swedes and the Dutch, who asserted a prior claim to that land.

In 1640, New Sweden was founded a few miles south of Christina. In 1644, Queen Christina appointed Lt. Col. Johan Printz as Governor of New Sweden. She directed boundaries to be set and to reach Cape Henlopen north along the west side of Godyn's Bay (Delaware Bay), up the South River (Delaware River), past Minquas Kill (Christina River), to Sankikans (Trenton Falls). Printz settled on Tinicum Island, as the seat of government and capital of the New Sweden colony.

Peter Stuyvesant, Governor of New Netherland, sailed up the South River in 1651. He purchased land from the Lenape that covered Minquas Kill to Bompties Hook (Bombay Hook); the Lenape had sold part of the property to the Swedes in 1638. Stuyvesant began to build Fort Casimir (contemporary New Castle).

In 1654, Johan Risingh, Commissary and Councilor to the Governor Lt. Col. Printz, officially assumed Printz's duties and began to expel all Dutch from New Sweden. Fort Casimir surrendered and was renamed Fort Trinity in 1654. The Swedes had complete possession of the west side of the Delaware River. On June 21, 1654, the Lenape met with the Swedes to reaffirm the purchase.

Having learned of the fall of Fort Casimir, the Dutch sent Stuyvesant to drive the Swedes from both sides of the river. They allowed only Dutch colonists to settle in the area and on August 31, 1655, the territory was converted back to Fort Casimir. Consequently, Fort Christina fell on September 15 to the Dutch and New Netherland ruled once again. John Paul Jacquet was immediately appointed Governor, making New Amstel the capital of the Dutch-controlled colony.

As payment[to whom?] for regaining the territory, the Dutch West India Company conveyed land from the south side of Christina Kill to Bombay Hook, and as far west as Minquas land. This land was known as the Colony of The City. On December 22, 1663, the Dutch transferred property rights to the territory along the Delaware River to England.

In 1664, the Duke of York, James, was granted this land by King Charles II. One of the first acts by the Duke was to order removal of all Dutch from New Amsterdam; he renamed New Amstel as New Castle. In 1672, the town of New Castle was incorporated and English law ordered. However, in 1673, the Dutch attacked the territory, reclaiming it for their own.

On September 12, 1673, the Dutch established New Amstel in present-day Delaware, fairly coterminous with today's New Castle County. The establishment was not stable, and it was transferred to the British under the Treaty of Westminster on February 9, 1674. On November 6, 1674, New Amstel was made dependent on New York Colony, and was renamed New Castle on November 11, 1674.

On September 22, 1676, New Castle County was formally placed under the Duke of York's laws. It gained land from Upland County on November 12, 1678.

In September 1673, a Dutch council established a court at New Castle with the boundaries defined as north of Steen Kill (present-day Stoney Creek) and south to Bomties Hook (renamed Bombay Hook). In 1681, a 12-mile arc was drawn to specifically delineate the northern border of New Castle County as it currently exists. In 1685, the western border was finally established by King James II; this was set as a line from Old Cape Henlopen (presently Fenwick) west to the middle of the peninsula and north up to the middle of the peninsula to the 40th parallel. 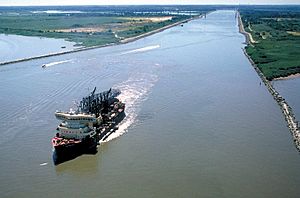 According to the U.S. Census Bureau, the county has a total area of 494 square miles (1,280 km2), of which 426 square miles (1,100 km2) is land and 68 square miles (180 km2) (13.8%) is water. The boundaries of New Castle County are described in § 102 of the Delaware Code. The county is drained by Brandywine Creek, Christina River, and other channels. Its eastern edge sits along the Delaware River and Delaware Bay.

New Castle County, like all of Delaware's counties, is subdivided into Hundreds. New Castle County is apportioned into ten Hundreds: Brandywine, Christiana, Wilmington (the city of Wilmington, which, by law, is a Hundred in itself), Mill Creek, White Clay Creek, Pencader, New Castle, Red Lion, St. Georges and Appoquinimink.

The Chesapeake and Delaware Canal was built through New Castle County, and adjoining Cecil County, Maryland, between 1822 and 1829. 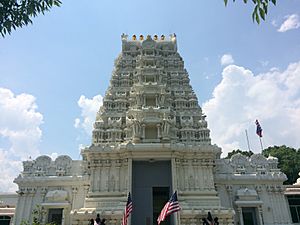 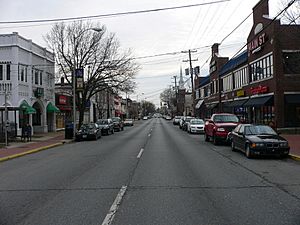 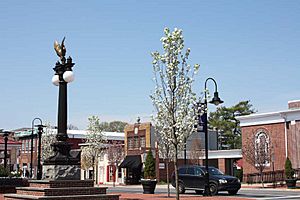 All content from Kiddle encyclopedia articles (including the article images and facts) can be freely used under Attribution-ShareAlike license, unless stated otherwise. Cite this article:
New Castle County, Delaware Facts for Kids. Kiddle Encyclopedia.