Cecil County is a county located in the U.S. state of Maryland at the northeastern corner of the state, bordering both Pennsylvania and Delaware. As of the 2010 census, the population was 101,108. The county seat is Elkton. The county was named for Cecil Calvert, 2nd Baron Baltimore (1605–1675), the first Proprietary Governor of the Province (colony) of Maryland. It is part of the Philadelphia-Camden-Wilmington, PA-NJ-DE-MD Metropolitan Statistical Area. Cecil County has existed since the late 1600s, though it continued to grow in population and town size. The county is located in Wilmington's Radio Market and Philadelphia's Designated Market Area.

The area now known as Cecil County was an important trading center long before the county's official organization in 1674 by proclamation of Lord Baltimore. It had previously been a northeastern part of a much larger Baltimore County, in the northeastern portion of the Province. This had included present-day Baltimore City and county, Carroll, eastern Frederick, and portions of Howard and Anne Arundel counties. At the time of its founding, Cecil County also included modern Kent County and the border on the Eastern Shore of the Chesapeake Bay went as far south as the Chester River, until its later formation in 1706. The Piscataway traded with the Susquehannocks near Conowingo, and with Lenape of the Delaware valley and their Nanticoke allies near the Elk River and Elk Neck Peninsula. A southern tribe sometimes called the Shawnace also moved into what later became North East, Maryland. Captain John Smith visited the area in 1608. William Claiborne, a Puritan trader based in Virginia, earlier established a trading post at what is now known as Garrett island at the mouth of the Susquehanna River near what became Perryville. Bohemian immigrant Augustine Herman lobbied for Cecil County's creation, and drew the 1674 maps, in exchange for which Herman received extensive land grants, including one developed as Bohemia Manor, where he eventually died. Another early developer was George Talbot, appointed Surveyor-General of Maryland in 1683,

Until the American Revolution, Cecil county was an important shipping center, both within the colonies and abroad. It exported not only its own agricultural products, but also animal skins from the west and tobacco from the south. St. Francis Xavier Church (Warwick, Maryland) begun as a Jesuit mission in 1704 and rebuilt in 1792, is one of Maryland's oldest churches, though now a museum. St. Mary Anne's Episcopal Church, authorized in 1706 and rebuilt in 1742 is another (and still in use, as well as maintaining a historic graveyard). West Nottingham Academy founded by Presbyterian Rev. Samuel Finley in 1744, educated Benjamin Rush and Richard Stockton, both of whom signed the Declaration of Independence, and still operates today (though disaffiliated from the Presbyterian church and with additional buildings). The Principio Furnace, founded in 1719, became an important exporter of pig iron. During the American Revolution both British and colonial troops traveled through Cecil County, although no major battles occurred within its borders. The Battle of Cooch's Bridge occurred in nearby Delaware, and both General Howe and General George Washington stopped in Elkton during the summer of 1777. Robert Alexander, the area's delegate to the Continental Congress of 1776, spoke with both sides but ultimately decided to go into exile in England without his wife. She remained a loyal Marylander and received a life estate in some of Elkton property that Maryland confiscated.

The War of 1812 caused Cecil County considerable damage. Not only did British Admiral George Cockburn blockade the upper Chesapeake bay, in response to musket fire from colonials at Welch Point, his troops destroyed a trading post known as Frenchtown. They tried to sail further up the Elk River to the county seat at Elkton, but turned back under fire from Fort Defiance, also hindered by a cable across the navigation channel. British troops also destroyed most of Havre de Grace in nearby Harford County, Maryland. Cockburn's ships then traveled up the Sassafras River, and, meeting resistance, destroyed Georgetown, Maryland and Fredericktown, Maryland. Avoiding Port Deposit which rumors called heavily defended, the British destroyed the Principio Iron Works, an important military target.

Port Deposit boomed after the Susquehanna Canal opened in 1812. Engineer James Rumsey, who grew up in Bohemia Manor before moving to Bath, Virginia (or Berkeley Springs, West Virginia), invented a steam boat which he demonstrated to George Washington, before traveling to London to secure patents against competition from John Finch. Rumsey died there in 1792, but his lawyer brother Benjamin Rumsey moved south to Joppa, Maryland and served as Maryland's Chief Justice for 25 years. Steamboats, using technology such as by Robert Fulton, came to dominate travel on the bay during the following decades. The Eagle, built in Philadelphia in 1813, transported travelers between Baltimore and Elkton, where they connected with stage coaches to travel to Wilmington, Philadelphia and other points north. An 1802 attempt to build a canal to connect the Elk River to Christiana, Delaware (connecting the Chesapeake and Delaware watersheds) failed within two years. However, between 1824 and 1829, with financial support from the states of Maryland, Delaware and Pennsylvania, over 2600 workers built the 14 mile long Chesapeake and Delaware Canal, which became for a while the busiest canal in the new nation. The U.S. Army Corps of Engineers still operates it today, and Chesapeake City, Maryland, which had been Bohemia Manor until 1839, has a museum explaining the canal's importance. Railroads and bridges also proved economically important to Cecil county and surrounding region. The New Castle and Frenchtown Railroad began service in 1831. Railroads crisscrossed Cecil county within three decades, although they ultimately greatly reduced its importance as a trading center. Cities such as Philadelphia and Baltimore could achieve economies of scale impossible for the county's small Chesapeake ports. Even the railroad's Frenchtown section was abandoned in 1859, and the port became a ghost town (though other sections remain in use, operated by the Norfolk Southern Railway).

During the American Civil War, Perryville, Maryland became an important staging ground for Union troops. It had been the halfway point of the railroad line between Wilmington and Baltimore, but damage to the section into Baltimore caused Union troops to embark ferries at Perryville. No Civil War battles occurred in Cecil County, but residents had strongly divided loyalties. Slavery had declined from 3400 slaves in the county in 1790 to just 800 in 1850. The Underground Railroad had crossed through Cecil County, perhaps assisted by the 'Fighting Quaker,' former Congressman and U.S. Marshall John Conard, who moved to Northeast between 1834 and 1851 and was reburied at St. Mary Anne's Episcopal Church there`after his death in Philadelphia in 1857. Frederick Douglass crossed Cecil county on his road to freedom in 1838. While Jacob Tome made his fortune in the area and stayed, other Cecil county natives left in search of economic opportunity. David Davis moved to Illinois upon graduating from Yale Law School in 1835, where he became Abraham Lincoln's law partner and later served in that legislature as well as a judge, before moving to Washington D.C. to help President Lincoln, who later named him to the United States Supreme Court. Slavery's abolition affected many local property owners, as well as their slaves. After the war, Perryville again became a railroad town, and later received business from interstate highway travelers crossing the Susquehanna bridges. Although Cecil county had once been one of the wealthiest in Maryland, and has worked hard recently to attract industry as well as tourist dollars, the average income of residents is now near that of Americans as a whole.

Cecil County has a number of properties on the National Register of Historic Places.

Cecil County is in the northeast corner of Maryland, bounded on the north and east by the Mason–Dixon line with Pennsylvania and Delaware. The western border is defined by the lower reaches of the Susquehanna River and the northernmost coves, flats and tributaries of the Chesapeake Bay. On the south, the county is bounded by the Sassafras River and Kent County, Maryland. The county is part of the Delmarva Peninsula as well as Maryland's "Eastern Shore."

Topographically, Cecil County straddles the border between the rolling hills of the Piedmont Plateau north of Route 40 and the flatlands of the Atlantic Coastal Plain to the south. The highest and most rugged hills are found in the northwestern and north-central parts of the county, reaching 534 feet (163 m) just south of the Mason–Dixon line near Nottingham, Pennsylvania and just east of U.S. Route 1. The lowest elevation is sea level along the Chesapeake Bay.

Cecil County is primarily rural, with denser development around the county seat of Elkton and along Route 40. The county is bisected from east to west by the Chesapeake and Delaware Canal, which connects the Delaware River to the Chesapeake Bay by way of the Elk River. The canal passes through the town of Chesapeake City, where a high-level bridge facilitates the passage of large ships beneath Maryland State Route 213.

Cecil County is also bisected east-to-west by Interstate 95, known as the John F. Kennedy Memorial Highway in Maryland. The highway provides a major artery for traffic between the Baltimore-Washington area to the southwest and the Philadelphia and New York/New Jersey regions to the northeast. The Office of Management and Budget has designated Cecil County as part of the Philadelphia-Camden-Wilmington metropolitan area.

Cecil County is home to a small Amish community in the Cecilton area that was founded in 1999. Amish families moved to the area from Lancaster County, Pennsylvania because of increasing costs and the declining amount of farmland there.

There are 17 elementary schools, six middle schools, five high schools, and the Cecil County School of Technology, which specializes in career and technology education, all operated by Cecil County Public Schools.

There are 7 branches of the Cecil County Public Library and the Library also does significant outreach throughout the county. 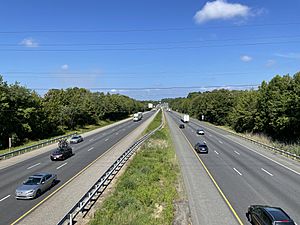 The northern terminus of MARC's Penn Line commuter rail service to Baltimore and Washington, D.C. is in Perryville. Recently, the Wilmington Area Planning Council conducted a study on the travel patterns of residents in the county, and they suggested that the MARC line extends from Perryville up to Newark or even Wilmington, where it meets SEPTA and Amtrak lines.

The county is one of only two areas on Amtrak's Acela that does not have local services.

All content from Kiddle encyclopedia articles (including the article images and facts) can be freely used under Attribution-ShareAlike license, unless stated otherwise. Cite this article:
Cecil County, Maryland Facts for Kids. Kiddle Encyclopedia.