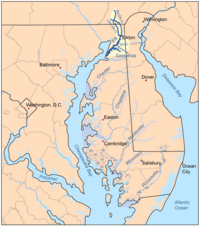 Map of the rivers of the Eastern Shore of Maryland with the Elk and its watershed highlighted.

The Elk River is a tidal tributary of the Chesapeake Bay on the Eastern Shore of Maryland and on the northern edge of the Delmarva Peninsula. It is about 15 miles (24 km) long. As the most northeastern extension of the Chesapeake Bay estuary, it has served as one entrance to the Chesapeake & Delaware Canal since the 19th century. The canal and river now serve as one boundary of the Elk Neck Peninsula. The river flows through Cecil County, Maryland, with its watershed extending into New Castle County, Delaware and Chester County, Pennsylvania. Elkton, the county seat of Cecil County, is located at its head. Its total watershed area is 143 square miles (370 km2) (including the Bohemia River), with 21 square miles (54 km2) of open water, so its watershed is 15% open water. It is south and east of the North East River, and north of the Sassafras River. 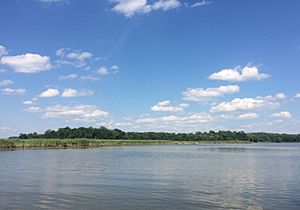 View of the Elk River near Elkton, Maryland

There are several small creeks on the western shore, including Muddy Creek, Jones Creek, Bull Minnow Run, and Plum Creek. On the eastern shore major tributaries are Back Creek, much of which is now the Chesapeake & Delaware Canal, and the Bohemia River. Small creeks include Pearce Creek, Cabin John Creek, Herring Creek, and Perch Creek.

All content from Kiddle encyclopedia articles (including the article images and facts) can be freely used under Attribution-ShareAlike license, unless stated otherwise. Cite this article:
Elk River (Maryland) Facts for Kids. Kiddle Encyclopedia.