Oxford is a borough in Chester County, Pennsylvania, United States. Oxford is the closest town to Lincoln University. The population was 5,077 at the 2010 census.

The borough was once called Oxford Crossing and Oxford Village.

In 1833, Oxford was officially incorporated as a borough. Its first burgess (now called the mayor) was Thomas Alexander, who operated a general store thought to be the oldest building in Oxford.

The northern half of Oxford was owned by the Dickey family in the 19th century. The Dickeys included the local Presbyterian minister, the Mr O'Malley of the local bank, a state Representative, and local businessmen. Reverend John Miller Dickey and his wife Sarah Emlen Cresson founded Ashmun Institute in 1854, and which later became Lincoln University. The family played a major role in re-routing the new Philadelphia and Baltimore Central Railroad (P&BC) through Oxford. Track was laid in the 1850s. The railroad reached Oxford in 1860 and later connected to Philadelphia and Baltimore. By the time of the Civil War, Oxford was a bustling community. The business district on Third Street was entirely re-built at this time, including the Oxford Hotel (1858) and Oxford Hall (1862). Oxford became known for its confectionery and candy businesses and was the location of many manufacturing facilities. A second railroad, the Peach Bottom Railway, was built in the 1870s from Oxford to Peach Bottom. It carried farm products and passengers but was not profitable. It struggled through three bankruptcies and reorganized as the Lancaster, Oxford and Southern Railway, finally closing permanently in 1918.

The Pennsylvania Railroad took control of the P&BC on the eve of World War I. Passenger train service on the line ended in 1935. In the late 20th century, transportation changes resulted in Oxford being located off the main roads. A bypass was constructed for U.S. Route 1 in the late 1960s, but the major change was the 1963 opening of Interstate 95, which shifted the bulk of the Philadelphia-Baltimore traffic away from Oxford. The former Pennsylvania Railroad Station is now the local police station.

The Oxford Historic District and Oxford Hotel are listed on the National Register of Historic Places. 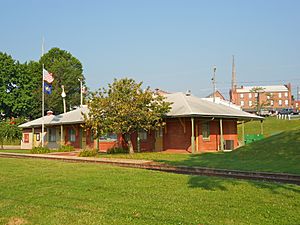 According to the United States Census Bureau, the borough has a total area of 1.9 square miles (4.9 km2), all of it land. 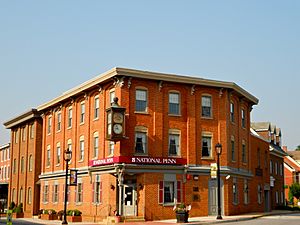 Town clock on the BB&C Bank

The Oxford Town Clock, on the National Penn bank on South Third Street, was restored in May 2001. The Fire House located right off of Market Street was originally the Dickey Building, but was renovated and named the Union Fire Company No. 1. They are still in this location today.

The Oxford Presbyterian Church, one of the oldest buildings in town, was destroyed by fire in 1989 after the steeple (which it was known for and can be seen for miles) was struck by lightning. It has been rebuilt and is still in use today.

All content from Kiddle encyclopedia articles (including the article images and facts) can be freely used under Attribution-ShareAlike license, unless stated otherwise. Cite this article:
Oxford, Pennsylvania Facts for Kids. Kiddle Encyclopedia.