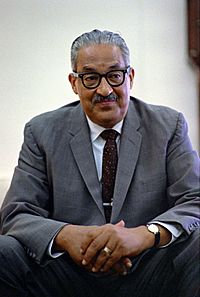 Thurgood Marshall (July 2, 1908 – January 24, 1993) was an American jurist and the first African American to serve on the Supreme Court of the United States. Thurgood Marshall, earlier named Thoroughgood Marshall (which he changed in the 2nd grade), was born in Baltimore, Maryland. Marshall served on the Court from 1967 to 1991. In 1946 he was awarded the Springarn Medal for all his achievements and hard work for the NAACP. Marshall had been one of the NAACP's top lawyers. He was one of the lawyers who argued Brown v. Board of Education. He was also Solicitor General of the United States.

Thurgood Marshall attended Frederick Douglass High School in Baltimore, Maryland and was in the class with the brightest students. He graduated a year early in 1925 with a B-grade average, and was in the top three of his class. In 1929 He married Vivian Burey . He went on to attend Lincoln University and graduated in 1930. He applied to the University of Maryland Law School, but was denied admission because he was black. He later joined the NAACP (National Association for the Advancement of Colored People) and became an active member. In 1934, Marshall became director of the NAACP, Legal Defense and for an Educational Fund. He won his first major civil rights case in Maryland in 1935 with the help of Charles Houston. He won 29 of 32 Supreme Court cases. He went on to argue thirty-two cases before the Supreme Court in 1940. Marshall argued in the Smith v. Allwright which disputed the rights of black people from voting in 1944. He also fought in the Brown vs. Board of Education of Topeka about racial segregation in public schools in 1948, which was one of the biggest cases of the century. In 1954 the Supreme Court ended racial segregation in public schools. This was a rule violation of the 14th Amendment. It made way for integration and was a major victory of the civil rights movement. He then went on to investigate U.S. Army courts-martial in 1950-1951, in Japan and Korea to help African American soldiers. In 1961 John F. Kennedy appointed him to the US Court of Appeals and he won 29 cases before attending the Supreme Court.

Between the years 1908-1993, he fought for individual rights. A quote that he wrote himself  “A child born to a black mother in a state like Mississippi….. has the same rights as a white boy born to the wealthiest person the United States. It’s not true, but I challenge anyone to say it is not a goal worth working for..” Marshall believed that both blacks and whites should have equal rights but it was not happening in the United States. He thought it was right for both rich and poor children to have equal rights. This quote had to do with Thurgood Marshall’s life because he was not rich but his parents and teachers worked hard to help him become a lawyer. He had to memorize the constitution. As a lawyer, he fought to end segregation between blacks and whites.

Thurgood Marshall was against the death penalty because he didn't think that it was necessary. He argued that there is no reason for the people who did something wrong, to go through the death penalty. He says that they should have a less painful punishment by going to prison instead. In 1990, Marshall said a lot of things about the death penalty and why he didn't want it enforced.

Back in Thurgood Marshall's time, the time of segregation, some thought that if people were more open they would have seen the most important black male of the century. He joined the NAACP and argued in Brown v Board. To this day there is only one other black male in the Supreme Court justice. In his time in the Supreme Court he worked to end segregation and fought for the equal rights for all people. Even though he’s dead his legacy is still alive.

All content from Kiddle encyclopedia articles (including the article images and facts) can be freely used under Attribution-ShareAlike license, unless stated otherwise. Cite this article:
Thurgood Marshall Facts for Kids. Kiddle Encyclopedia.