The Thurgood Marshall United States Courthouse is a Classical Revival courthouse located at 40 Centre Street on Foley Square in the Civic Center neighborhood of lower Manhattan in New York City. The building, designed by Cass Gilbert and his son, Cass Gilbert, Jr., is listed on the National Register of Historic Places as U.S. Courthouse.

The United States Court of Appeals for the Second Circuit and the United States District Court for the Southern District of New York hear cases in the courthouse, which is across the street from the Metropolitan Correctional Center, New York City. 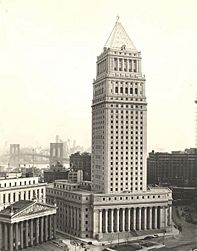 The Thurgood Marshall United States Courthouse in 1936, the year of its completion

Architect Cass Gilbert was commissioned to design a new federal courthouse at Foley Square in 1931. Design work began in 1933. Construction began in July 1932 and lasted three and a half years. It was among the first federal skyscrapers constructed. After Gilbert's death, construction was supervised by his son Cass Gilbert Jr. until its completion in 1936. The courthouse was originally known as the Foley Square Courthouse.

It was listed on the National Register of Historic Places (as U.S. Courthouse) on September 2, 1987.

Notable events over the years that have occurred in the courthouse include the espionage conspiracy trial of Julius and Ethel Rosenberg; the guilty plea of Ivan Boesky, who inspired the Gordon Gekko character, to conspiracy charges; and the trial of Martha Stewart.

In 1992, three large historic courtrooms were restored. The courthouse was substantially renovated in 1999. In 2001, the United States Congress passed a bill renaming the building in honor of Thurgood Marshall, who had worked at the courthouse from 1961 to 1965 as a judge of the Second Circuit Court of Appeals before later being elevated to the Supreme Court of the United States. The legislation was signed into law on August 20, 2001, and the building was rededicated on April 15, 2003.

The building has two major parts, the base and the tower. Including both, the building is 590 feet (180 m) tall and 37 stories.

The six-story courthouse base is marked by a pilastered facade and a colonnade. Built around three interior courtyards, it is rusticated and irregularly shaped, following the outline of the site. Massive granite steps flanked by large pedestals lead up to the main entrance on Foley Square. Gilbert intended the pedestals to bear two monumental sculptural groups, but they were never executed. Ten four-story Corinthian columns form the imposing portico that shelters the entrance, and the frieze is carved with a detailed floral design. The ends of the entablature above are embellished with roundels, designed to resemble ancient coins, on which are carved the heads of four ancient lawgivers: Plato, Aristotle, Demosthenes, and Moses. The Corinthian capitals crowning the columns of the portico return to top pilasters along the building's other primary facades. Minnesota granite, off-white in color and mottled with peach and gray, was used to finish the exterior elevations of the courthouse.

A 30-story square tower is 590 feet in height and is set back from the base parallel to the front of the building. The tower is set back slightly on the 27th floor, marked by urns at the corners. The roof of the tower is pyramidal, pitched steeply, and made of terracotta, with a gold leaf, with a small open lantern, also gold-glazed terracotta, at the top.

The main hall spans the width of the building along its principal elevation. It is very similar in design and ornamentation to the main hall of the United States Supreme Court building, which Gilbert designed at the same time. Variations on the decorative motifs employed within the main hall appear throughout the rest of the interior. Twenty-nine feet in height, it has green- and black-veined white marble floors; the white marble that lines its walls has gold- and cream-colored veining, providing a subtle but attractive contrast of warm and cool tones. Elaborate molding, featuring a meander (Greek key) design, divides the ceiling into rectangular, coffered sections. The coffers are decorated with large plaster rosettes tipped with 22k gold leaf on alternating backgrounds of crimson and peacock blue, with smaller rosettes at the junctions of the coffers. 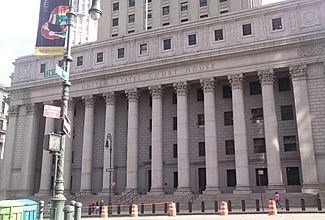 The colonnade of Corinthian columns

Richly ornamental bronzework surrounds many of the interior doors, including those of the elevators. This bronze detailing features an unusual combination of metaphorical images related to law and government, including dolphins, an erudite if somewhat obscure symbol of birth and democratic ideals. Among the other motifs are grasshoppers apparently feeding on stalks of wheat, accompanied by the Greek word meta, meaning "to transform", which conveys the idea that change, even conflict, is essential to growth; there are also owls, representing wisdom, and acorns and oak leaves, signifying strength and endurance.

The building contains 35 courtrooms. Sixteen are original to the courthouse: five in the base and eleven in the tower, including the historic United States Court of Appeals courtroom. All have wood-paneled walls with colossal round arches and fluted Ionic pilasters; the Greek key molding seen in the main hall also enframes the ceilings of the tower courtrooms. The Court of Appeals courtroom ceiling also depicts nautical symbols.

The courthouse was not unanimously well-received when it was completed. Architecture critic Lewis Mumford called it "the supreme example of pretentiousness, mediocrity, bad design and fake grandeur."

All content from Kiddle encyclopedia articles (including the article images and facts) can be freely used under Attribution-ShareAlike license, unless stated otherwise. Cite this article:
Thurgood Marshall United States Courthouse Facts for Kids. Kiddle Encyclopedia.