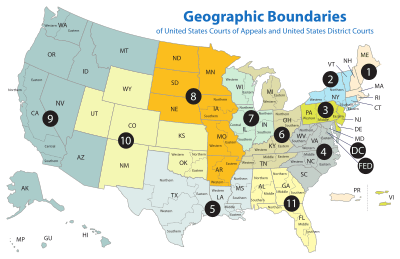 Decisions of the United States courts of appeals have been published by the private company West Publishing in the Federal Reporter series since the courts were established. Only decisions that the courts choose for publication are included. The "unpublished" opinions (of all but the Fifth and Eleventh Circuits) are published separately in West's Federal Appendix. They are also available in on-line databases like LexisNexis or Westlaw. More recently, court decisions are also available electronically on the official court websites. However, there are also a few federal court decisions that are classified for national security reasons.

All content from Kiddle encyclopedia articles (including the article images and facts) can be freely used under Attribution-ShareAlike license, unless stated otherwise. Cite this article:
United States courts of appeals Facts for Kids. Kiddle Encyclopedia.