The United States district courts are the trial courts of the federal court system.

United States district courts hold trials, like state courts do. However, the Constitution only gives federal courts the power to hear certain kinds of cases. For example, federal courts can hear cases about:

Each trial is heard by a judge and decided by a jury.

Each state (and Washington, D.C.) has at least one district court. So do four U.S. territories: Puerto Rico, Guam, the Virgin Islands, and the Northern Mariana Islands.

The last choice for appealing a court decision is to file an appeal asking the United States Supreme Court to hear the case.

Here is a map that shows which circuit each United States District Court is in. States that are the same color are in the same circuit. Each circuit has a number on it – for example, Texas, Louisiana, and Mississippi are in the 5th Circuit. 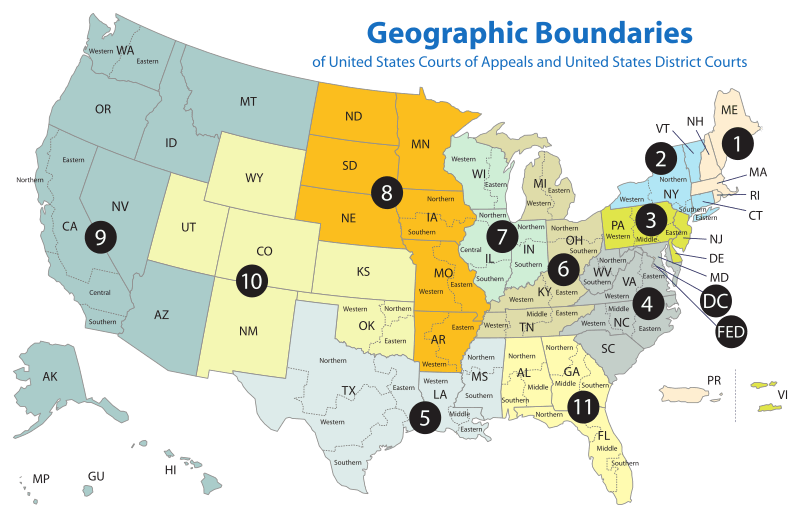 Here is a list of information about all of the United States District Courts. Just like with the map, districts that are in the same circuit are the same color. The colors are the same as the map (for example, districts in the 8th Circuit are orange on the map and on the list). To sort this table, click on the little triangle on the top row of the table, in the column you want to sort by.

All content from Kiddle encyclopedia articles (including the article images and facts) can be freely used under Attribution-ShareAlike license, unless stated otherwise. Cite this article:
United States district court Facts for Kids. Kiddle Encyclopedia.