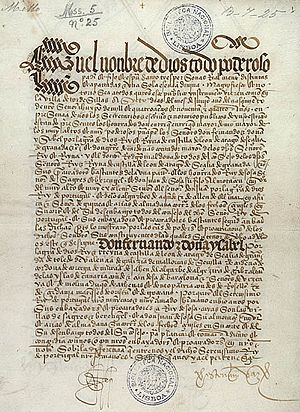 The Treaty of Tordesillas

A treaty is a written agreement between two or more parties that consists international law. The parties may be countries or other important groups. A treaty may be about any subject.

Two countries might agree to stop a war, or declare war on a common enemy, or allow each other's citizens or merchandise to cross borders freely. Treaties are usually used to settle disputes. The European Union is set up by treaties between most of the European nations.

All content from Kiddle encyclopedia articles (including the article images and facts) can be freely used under Attribution-ShareAlike license, unless stated otherwise. Cite this article:
Treaty Facts for Kids. Kiddle Encyclopedia.