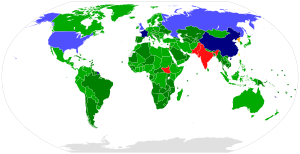 The Nuclear Non-Proliferation Treaty (or NNPT) is a treaty that was made to stop nuclear weapons from being built. It was written in 1968, entered into force in 1970, and 190 countries have signed it since then. Only four nations have not signed it: India, Israel, Pakistan South Sudan. North Korea withdrew in 2003.

The main corporations that made this treaty happen were the United Nations and the IAEA.

All content from Kiddle encyclopedia articles (including the article images and facts) can be freely used under Attribution-ShareAlike license, unless stated otherwise. Cite this article:
Nuclear Non-Proliferation Treaty Facts for Kids. Kiddle Encyclopedia.