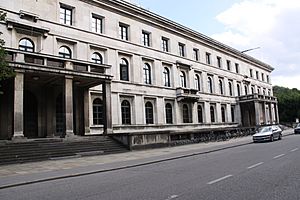 The Führerbau in Munich, site of the 1938 Munich Agreement

The Munich Agreement was an agreement between France, Italy, Nazi Germany and Britain. After Germany invaded the Sudetenland in Czechoslovakia, the British and French prime ministers tried to get Hitler to agree not to use his military in the future in return for the land he had taken. Hitler agreed. At first, people thought the agreement was a success, but Hitler invaded the rest of Czechoslovakia in 1939, which led to the start of the Second World War. 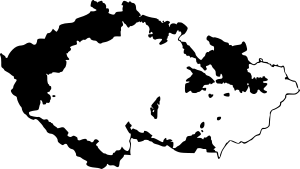 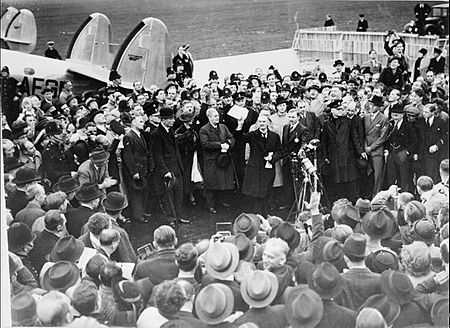 After the summit, the British prime minister Chamberlain returned to the UK where he declared that the Munich agreement meant "peace for our time"

On September 12th 1938 Hitler told Sudeten Germans that he would support them. On 15th, Chamberlain met with Hitler in a last ditch attempt to avert war. Hitler moderated his demands, saying he was only interested in parts of Czechoslovakia, and Chamberlain thought it reasonable, and that Hitler would be satisfied. However, on the 22nd, Hitler changed his demands saying he wanted the whole of the Sudetenland. The British Navy mobilised and war seemed imminent.

Mussolini persuaded Hitler to attend a four power peace conference in Munich on the 29th September. The conference was held between four leaders, Hitler for Germany, Mussolini for Italy, Chamberlain for Britain, and Daladier for France. The Soviet Union and Czechoslovakia were not invited.

At the conference Mussolini put forward a plan (really written by the German Foreign Office) that the Sudetenland was to become part of Germany immediately. The German army was to march into the Sudetenland the following day and claim it as German territory. Britain and France agreed, Czechoslovakia was not even consulted and the USSR was horrified. Chamberlain returned to Britain to receive a hero's welcome as he had achieved "peace for our time" with his appeasement policy.

Benes, the Czech president, resigned. He felt betrayed after Britain and France's promises to help Czechs. On the 1st October, Germans walked into the Sudetenland, and Hungary and Poland also helped themselves to land in Czechoslovakia where people of that nationality had been living.

All content from Kiddle encyclopedia articles (including the article images and facts) can be freely used under Attribution-ShareAlike license, unless stated otherwise. Cite this article:
Munich agreement Facts for Kids. Kiddle Encyclopedia.