Congress of Vienna facts for kids 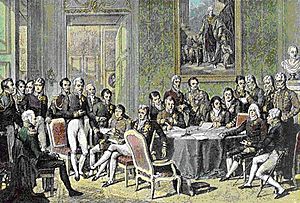 The Congress of Vienna by Jean-Baptiste Isabey, 1819.

The Congress of Vienna was a conference of ambassadors of the major powers of Europe. It was held in Vienna from November 1, 1814, to June 8, 1815. The chairman was the Austrian statesman Klemens Wenzel von Metternich.

Its purpose was to decide about the political situation in Europe after the defeat of Napoleon. To be precise there was never one "Congress of Vienna". Instead there were discussions in informal sessions among the Great Powers.

The Congress was concerned with determining the entire shape of Europe after the Napoleonic wars, with the exception of the terms of peace with France, which had already been decided by the Treaty of Paris, signed a few months earlier, on May 30, 1814.

The four victorious powers hoped to exclude the French from participation in the negotiations, but Charles-Maurice de Talleyrand-Périgord managed to get into "her inner councils" in the first weeks of negotiations.

All content from Kiddle encyclopedia articles (including the article images and facts) can be freely used under Attribution-ShareAlike license, unless stated otherwise. Cite this article:
Congress of Vienna Facts for Kids. Kiddle Encyclopedia.