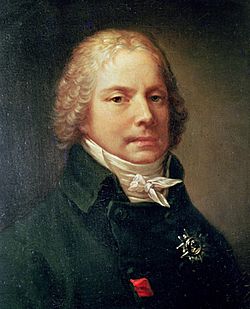 He was a bishop and worked successfully for Louis XVI. He changed sides and served the French Revolution and Napoleon I. When Napoleon started losing his wars, Talleyrand changed sides again and served Louis XVIII. He represented France at the Congress of Vienna. He changed sides once more and served Louis Philippe I. Since the beginning of the 19th century he was known simply as Talleyrand. He is widely seen as one of the most versatile and influential diplomats in European history. He was known to accept bribes from other European powers, especially while serving under Napoleon.

All content from Kiddle encyclopedia articles (including the article images and facts) can be freely used under Attribution-ShareAlike license, unless stated otherwise. Cite this article:
Charles-Maurice de Talleyrand-Périgord Facts for Kids. Kiddle Encyclopedia.