Distribution of world population in 1994 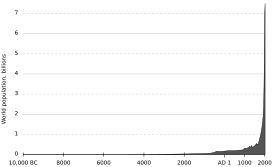 The estimated growth of the human population
For the statistical meaning, see Population (statistics).

Usually population refers to the number of humans in a certain area. The maximum population that can be supported in an area is called the carrying capacity.

The years taken for every billion people to be added to the world's population, and the years that population was reached (with future estimates).

Population growth increased significantly as the Industrial Revolution gathered pace from 1700 onwards. The last 50 years have seen a yet more rapid increase in the rate of population growth due to medical advances and substantial increases in agricultural productivity, particularly beginning in the 1960s, made by the Green Revolution. In 2017 the United Nations Population Division projected that the world's population will reach about 9.8 billion in 2050 and 11.2 billion in 2100.

In the future, the world's population is expected to peak, after which it will decline due to economic reasons, health concerns, land exhaustion and environmental hazards. According to one report, it is very likely that the world's population will stop growing before the end of the 21st century. Further, there is some likelihood that population will actually decline before 2100. Population has already declined in the last decade or two in Eastern Europe, the Baltics and in the Commonwealth of Independent States.

Human population control is the practice of altering the rate of growth of a human population. Concerns about overpopulation and its effects on poverty, environmental degradation, and political stability led to efforts to reduce population growth rates.

All content from Kiddle encyclopedia articles (including the article images and facts) can be freely used under Attribution-ShareAlike license, unless stated otherwise. Cite this article:
Population Facts for Kids. Kiddle Encyclopedia.