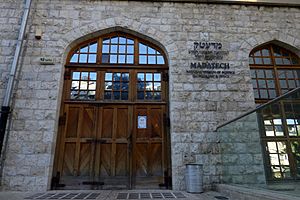 A door is a hard, flat object a person can open and close so that person can go into a room or other place. It is found in houses and other buildings. Doors are also found in cars and cages.

The reasons for a door are: 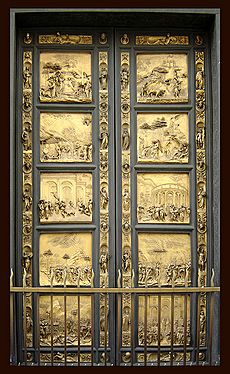 Door of the Florence Baptistery called Gates of Paradise

There are many kinds of doors, with different purposes. The most common type is the single-leaf door, which consists of a single rigid panel that fills the doorway. There are many variations on this basic design, such as the double-leaf door or double door and French windows, which have two adjacent independent panels hinged on each side of the doorway. 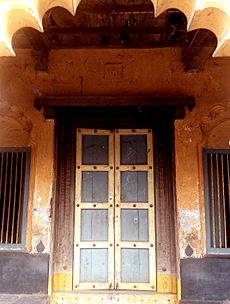 A door of a ruined choultry at Ryali in South India

The main types of door mechanisms

Most doors are hinged along one side to allow the door to pivot away from the doorway in one direction, but not the other. The axis of rotation is usually vertical. In some cases, such as hinged garage doors, the axis may be horizontal, above the door opening.

A swing door has special double-action hinges that allow it to open either outwards or inwards, and is usually sprung to keep it closed. 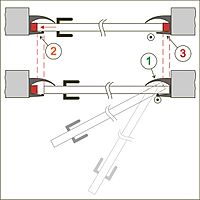 A selfbolting door has special hinges that permit the panel leaf to move laterally, so that the door itself becomes a giant bolt for better security. The selfbolting door principle can be used both for hinged doors as for rotating doors, as well as up-and-over doors (in the latter case, the bolts are then placed at top and bottom rather than at the sides).

French doors are derived from an original French design called the casement door. It is a door with lites where all or some panels would be in a casement door. A French door traditionally has a moulded panel at the bottom of the door. It is called a French window when used in a pair as double-leaved doors with large glass panels in each door leaf, and in which the doors may swing out (typically) as well as in.

A Mead door, developed by S Mead of Leicester, swings both ways. It is susceptible to forced entry due to its design.

A Dutch door or stable door consists of two halves. The top half operates independently from the bottom half. A variant exists in which opening the top part separately is possible, but because the lower part has a lip on the inside, closing the top part, while leaving the lower part open, is not.

A garden door resembles a French window (with lites), but is more secure because only one door is operable. The hinge of the operating door is next to the adjacent fixed door and the latch is located at the wall opening jamb rather than between the two doors or with the use of an espagnolette bolt.

It is often useful to have doors which slide along tracks, often for space or aesthetic considerations.

A bypass door is a door unit that has two or more sections. The doors can slide in either direction along one axis on parallel overhead tracks, sliding past each other. They are most commonly used in closets, in order to access one side of the closet at a time. The doors in a bypass unit will overlap slightly when viewed from the front, in order not to have a visible gap between them.

Sliding glass doors are common in many houses, particularly as an entrance to the backyard. Such doors are also popular for use for the entrances to commercial structures, although they are not counted as fire exit doors. The door that moves is called the "active leaf", while the door that remains fixed is called the "inactive leaf".

A revolving door has several wings or leaves, generally four, radiating from a central shaft, forming compartments that rotate about a vertical axis. A revolving door allows people to pass in both directions without colliding, and forms an airlock maintaining a seal between inside and out.

A pivot door, instead of hinges, is supported on a bearing some distance away from the edge, so that there is more or less of a gap on the pivot side as well as the opening side. In some cases the pivot is central, creating two equal openings.

A high-speed door is a very fast door some with opening speeds of up to 4 m/s, mainly used in the industrial sector where the speed of a door has an effect on production logistics, temperature and pressure control. High Speed Clean Room Doors are used in Pharmaceutical industries for the special curtain and stainless steel frames. They guarantee the tightness of all accesses. The powerful high-speed doors have a smooth surface structure and no protruding edges. Therefore, they can be easily cleaned and depositing of particles is largely excluded. High-speed doors are made to handle a high number of openings, generally more than 200000 a year. They need to be built with heavy duty parts and counterbalance systems for speed enhancement and emergency opening function. The door curtain was originally made of PVC, but was later also developed in aluminium and acrylic glass sections. High Speed refrigeration and cold room doors with excellent insulation values was also introduced with the Green and Energy saving requirements.

In North America, the Door and Access Systems Manufacturing Association (DASMA) defines high-performance doors as non-residential, powered doors, characterized by rolling, folding, sliding or swinging action, that are either high-cycle (minimum 100 cycles/day) or high-speed (minimum 20 inches(508 mm)/second), and two out of three of the following: made-to-order for exact size and custom features, designed to be able to withstand equipment impact (break-away if accidentally hit by vehicle) or designed to sustain heavy usage with minimal maintenance.

In addition to activation sensors automatically opening doors are generally fitted with safety sensors. These are usually an infrared curtain or beam, but can be a pressure mat fitted on the swing side of the door. The purpose of the safety sensor is to prevent the door from colliding with an object in its path by stopping or slowing its motion.A mechanism is set in modern automatic doors to ensure that door will be in open state in case of power failure.

An up-and-over door mechanism with counterweight 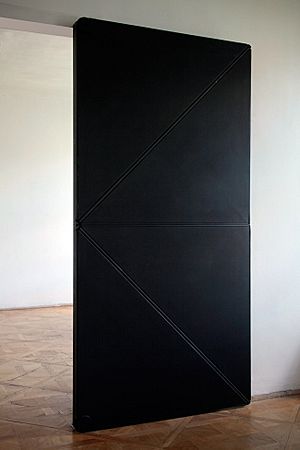 Up-and-over or overhead doors are often used in garages. Instead of hinges it has a mechanism, often counterbalanced or sprung, that allows it to be lifted so that it rests horizontally above the opening. A roller shutter or sectional overhead door is one variant of this type.

A tambour door or roller door is an up-and-over door made of narrow horizontal slats and "rolls" up and down by sliding along vertical tracks and is typically found in entertainment centres and cabinets.

Inward opening doors are doors that can only be opened (or forced open) from outside a building. Such doors pose a substantial fire risk to occupants of occupied buildings when they are locked. As such doors can only be forced open from the outside, building occupants would be prevented from escaping. In commercial and retail situations manufacturers have included in the design a mechanism that allows an inward opening door to be pushed open outwards in the event of an emergency (which is often a regulatory requirement). This is known as a 'breakaway' feature. Pushing the door outward at its closed position, through a switch mechanism, disconnects power to the latch and allows the door to swing outward. Upon returning the door to the closed position, power is restored.

Rebated doors, a term chiefly used in Britain, are double doors having a lip or overlap (i.e. a Rabbet) on the vertical edge(s) where they meet. Fire-rating can be achieved with an applied edge-guard or astragal molding on the meeting stile, in accordance with the American Fire door.

Evolution Door is a trackless door that moves in the same closure level as a sliding door. The system is an invention of the Austrian artist Klemens Torggler. From the technical point of view the Evolution Door is a further development (evolution) of the Drehplattentür that normally consists of two rotatable, connected panels which move to each other when opening.

Architectural doors have numerous general and specialized uses. Doors are generally used to separate interior spaces (closets, rooms, etc.) for convenience, privacy, safety, and security reasons. Doors are also used to secure passages into a building from the exterior, for reasons of climate control and safety.

All content from Kiddle encyclopedia articles (including the article images and facts) can be freely used under Attribution-ShareAlike license, unless stated otherwise. Cite this article:
Door Facts for Kids. Kiddle Encyclopedia.