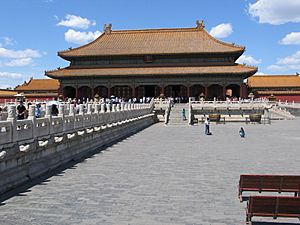 The houses of commoners, be they bureaucrats, merchants or farmers, tended to follow a set pattern: the center of the building would be a shrine for the deities and the ancestors, which would also be used during festivities. On its two sides were bedrooms for the elders; the two wings of the building (known as "guardian dragons" by the Chinese) were for the junior members of the family, as well as the living room, the dining room, and the kitchen, although sometimes the living room could be very close to the center.

Sometimes the extended families became so large that one or even two extra pairs of "wings" had to be built. This resulted in a U-shaped building, with a courtyard suitable for farm work. Merchants and bureaucrats, however, preferred to close off the front with an imposing front gate. All buildings were legally regulated, and the law held that the number of stories, the length of the building and the colours used depended on the owner's class. Some commoners living in areas plagued by bandits built communal fortresses called Tulou for protection.

There were certain architectural features that were reserved solely for buildings built for the Emperor of China. One example is the use of yellow roof tiles, yellow having been the Imperial color; yellow roof tiles still adorn most of the buildings within the Forbidden City. The Temple of Heaven, however, uses blue roof tiles to symbolize the sky. The roofs are almost invariably supported by brackets ("dougong"), a feature shared only with the largest of religious buildings. The wooden columns of the buildings, as well as the surfaces of the walls, tend to be red in color. Black is also a famous color often used in pagodas. It was believed that the gods are inspired by the black color to descend to the earth.

The Chinese 5-clawed dragon, adopted by the first Ming emperor for his personal use, was used as decoration on the beams, pillars, and on the doors on Imperial architecture. Curiously, the dragon was never used on roofs of imperial buildings.

Only the buildings used by the imperial family were allowed to have nine jian (間, space between two columns); only the gates used by the Emperor could have five arches, with the centre one, of course, being reserved for the Emperor himself. The ancient Chinese favored the color red. The buildings faced south because the north had a cold wind.

Numerology heavily influenced Imperial Architecture, hence the use of nine in much of construction (nine being the greatest single digit number) and the reason why the Forbidden City in Beijing is said to have 9,999.9 rooms—just short of the mythical 10,000 rooms in heaven.

Chinese urban planning is based on fengshui geomancy and the well-field system of land division, both used since the Neolithic age. The basic well-field diagram is overlaid with the luoshu, a magic square divided into 9 sub-squares, and linked with Chinese numerology.

All content from Kiddle encyclopedia articles (including the article images and facts) can be freely used under Attribution-ShareAlike license, unless stated otherwise. Cite this article:
Chinese architecture Facts for Kids. Kiddle Encyclopedia.