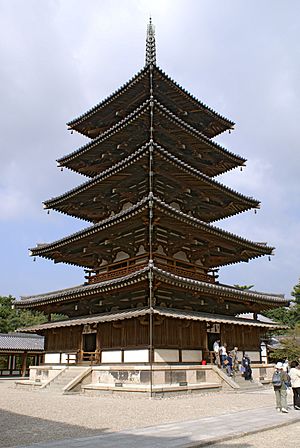 A pagoda is any kind of tower with multiple eaves. They are common in eastern and southeastern Asia.

Most pagodas are built for religious purposes. They are usually Buddhist. Some are used as Taoist temples.

The modern design for pagodas comes from the stupas of ancient Nepal. These were first built during the 3rd century BC. This kind of architecture has spread across Asia, taking on many differences as details specific to different regions are made a part of the overall design.

Stupas were used to house Buddhist relics. Later, the architecture of Chinese towers and Chinese pavilions blended into pagoda architecture. This eventually spread to Southeast Asia. The pagoda's original purpose was to house relics and sacred writings.

Pagodas come in many different sizes, with taller ones often attracting lightning strikes. While this has inspired tradition that the finial decorating the top of the structure can seize demons, the historically frequent damage has often motivated the modern addition of conductive wires connecting the finial to the earth, allowing it to function as a true lightning conductor.

Pagodas traditionally have an odd number of levels, a notable exception being the eighteenth century pagoda designed by Sir William Chambers at the Royal Botanic Gardens, Kew, London.

The pagodas in Myanmar, Thailand, Laos and Cambodia are very different from Chinese and Japanese pagodas. Pagodas in these countries are derived from Dravidian architecture. 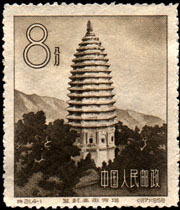 During the Southern and Northern Dynasties pagodas were mostly built of wood, as were other ancient Chinese structures. Wooden pagodas are resistant to earthquakes, however many have burnt down, and wood is also prone to both natural rot and insect infestation.

The literature of subsequent eras also provides evidence of the domination of wooden pagoda construction in this period. The famous Tang Dynasty poet, Du Mu, once wrote:

480 Buddhist temples of the Southern Dynasties,
uncountable towers and pagodas stand in the misty rain.

The oldest extant fully wooden pagoda standing in China today is the Pagoda of Fugong Temple in Ying County, Shanxi Province, built in the 11th century during the Song Dynasty/Liao Dynasty (refer to Architecture section in Song Dynasty).

Transition to brick and stone 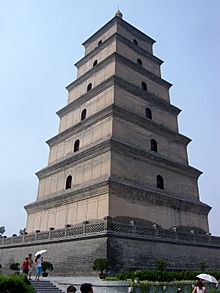 The brick-constructed Giant Wild Goose Pagoda, built by 652 and rebuilt in 704, during the Tang Dynasty.

During the Northern Wei and Sui dynasties (386–618) experiments began with the construction of brick and stone pagodas. Even at the end of the Sui, however, wood was still the most common material. For example, Emperor Wen of the Sui Dynasty (reigned 581–604) once issued a decree for all counties and prefectures to build pagodas to a set of standard designs, however since they were all built of wood none have survived. Only the Songyue Pagoda has survived, a circular-based pagoda built out of stone in 523 AD.

The earliest extant brick pagoda is the 40-metre-tall Songyue Pagoda in Dengfeng Country, Henan. This curved, circle-based pagoda was built in 523 during the Northern Wei Dynasty, and has survived for 15 centuries. Much like the later pagodas found during the following Tang Dynasty, this temple featured tiers of eaves encircling its frame, as well as a spire crowning the top. Its walls are 2.5 m thick, with a ground floor diameter of 10.6 m. Another early brick pagoda is the Sui Dynasty Guoqing Pagoda built in 597.

The earliest large-scale stone pagoda is a Four Gates Pagoda at Licheng, Shandong, built in 611 during the Sui Dynasty. Like the Songyue Pagoda, it also features a spire at its top, and is built in the pavilion style.

One of the earliest brick and stone pagodas was a three-storey construction built in the (first) Jin Dynasty (265–420), by Wang Jun of Xiangyang. However, it is now destroyed.

Brick and stone went on to dominate Tang, Song, Liao and Jin Dynasty pagoda construction. An example is the Giant Wild Goose Pagoda (652 AD), built during the early Tang Dynasty. The Porcelain Pagoda of Nanjing has been one of the most famous brick and stone pagoda in China throughout history. The Zhou dynasty started making the ancient pagodas about 3,500 years ago. 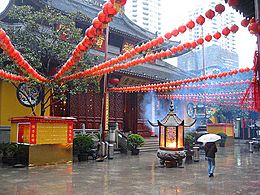 Jade Buddha Temple in Shanghai follows the Song Dynasty multi-courtyard design, and does not feature a pagoda. The main hall is at the center.

Pagodas, in keeping with the tradition of the White Horse Temple, were generally placed in the center of temples until the Sui and Tang dynasties. During the Tang, the importance of the main hall was elevated and the pagoda was moved beside the hall, or out of the temple compound altogether. In the early Tang, Daoxuan wrote a Standard Design for Buddhist Temple Construction in which the main hall replaced the pagoda as the center of the temple.

The design of temples was also influenced by the use of traditional Chinese residences as shrines, after they were philanthropically donated by the wealthy or the pious. In such pre-configured spaces, building a central pagoda might not have been either desirable or possible.

In the Song Dynasty (960–1279), the Chan (Zen) sect developed a new 'seven part structure' for temples. The seven parts—the Buddha hall, dharma hall, monks' quarters, depository, gate, pure land hall and toilet facilities—completely exclude pagodas, and can be seen to represent the final triumph of the traditional Chinese palace/courtyard system over the original central-pagoda tradition established 1000 years earlier by the White Horse Temple in 67. Although they were built outside of the main temple itself, large pagodas in the tradition of the past were still built. This includes the two Ming Dynasty pagodas of Famen Temple and the Chongwen Pagoda in Jingyang of Shaanxi Province.

A prominent, later example of converting a palace to a temple is Beijing's Yonghe Temple, which was the residence of Yongzheng Emperor before he ascended the throne. It was donated for use as a lamasery after his death in 1735.

Examples of Han Dynasty era tower architecture predating Buddhist influence and the full-fledged Chinese pagoda can be seen in the four pictures below. Michael Loewe writes that during the Han Dynasty (202 BC – 220 AD) period, multi-storied towers were erected for religious purposes, as astronomical observatories, as watchtowers, or as ornate buildings that were believed to attract the favor of spirits, deities, and immortals.

Pagodas built during the Sui and Tang Dynasty usually had a square base, with a few exceptions such as the Daqin Pagoda:

Pagodas of the Five Dynasties, Northern and Southern Song, Liao, Jin, and Yuan Dynasties incorporated many new styles, with a greater emphasis on hexagonal and octagonal bases for pagodas:

Pagodas in the Ming and Qing Dynasties generally inherited the styles of previous eras, although there were some minor variations:

Places called "pagoda" but which are not tiered structures with multiple eaves:

Structures not generally thought of as pagodas, but which have some pagoda-like characteristics:

All content from Kiddle encyclopedia articles (including the article images and facts) can be freely used under Attribution-ShareAlike license, unless stated otherwise. Cite this article:
Pagoda Facts for Kids. Kiddle Encyclopedia.