Taipei 101 (Chinese: 臺北101) is 101-floor building in Taipei, Republic of China (Taiwan). In 2004, it replaced the Willis Tower (which used to be called the Sears Tower) as the tallest completed building in the world. However, in 2010, it was surpassed by the Burj Khalifa in Dubai.

Taipei 101 does not hold the record for tallest building from ground to pinnacle. The Sears Tower has two television antennas on top of it, making its height from the ground to the top of the taller antenna 527 m (1,729 ft).

Taipei 101 is the recognized symbol of Taipei city, it brings a lot of tourists every day. The location of Taipei 101 is at the southern end of the Xinyi District, the newest area of Taipei city. Besides the tower, the base of the building houses includes a multi-level shopping mall, food court, various restaurants and stores, and an international grocery store. Every New Year's Eve, Taipei 101 is host to an impressive fireworks display that attracts people from all over Taiwan and other neighboring countries like Japan and Singapore to the area.

The Taipei 101 Observatory is open every day from 9AM to 10PM. The observatory is spread over 4 floors where visitors can enjoy the fantastic scenery and learn about the engineering marvel that is Taipei 101, the tallest green building in the world. Visitors can buy the tickets on the 5F Taipei 101 Mall, the general ticket costs NT$500 per each and the student ticket (with valid ID) costs NT$450 per each, all children (under 115 cm) are free. After purchasing the tickets, visitors may take the Guinness World Record breaking high-speed elevator to the observatory on the 89TH floor.

The 88th floor is the Beauty of Taiwan Multimedia Corridor, Super Big Wind Damper, Treasure Sky, the hallway connecting the two decks is designed to setting the natural beauty of Taiwan, providing 270-degree views of well-known scenic locations in Taiwan, leading to the engineering marvel known as a wind damper, a 5.5 meters diameter, 660 ton weight suspended within the building to offset the force of wind and help 101 stand upright. Also included is Treasury Sky, a collection of unique jewel crafts.

The 89th floor is the Indoor Observatory, visitors can learn about the design process and construction of Taipei 101 and other similar large-scale building projects around the world, including a free audio tour in eleven languages, as well as high-powered field glasses, snacks, and professional photography service.

The 91st floor is an outdoor Observatory. The outdoor observatory is accessible by stairs from the 89th floor. From the outside, it's possible to view the spire at the 508-meter-high apex, but tourists need to be careful of the strong winds. Inside the building, on the 91F, is a small theater showcasing films about the building and the annual New Year fireworks display. The 91st floor is only open on days with good weather conditions.

Survive ways from earthquake and typhoons

Taipei 101 has some of the most modern safety security of anything ever built, requiring a challenging combination of strength and flexibility, which allow it to withstand winds up to 216 km/h (134 mph), and earthquakes of a magnitude of 9.0. It has higher safer ratings than Taiwan’s nuclear power plants.

The “double stairstep”design reduce the potentially dangerous oscillations caused by high winds by about 30-40%, allowing the structure to stand, even under the force of relentless typhoons. And by now, they’ve become a recognizable design element of the structure. 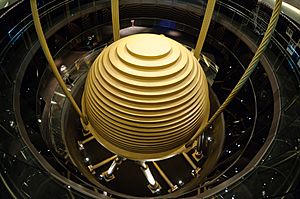 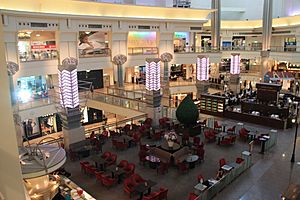 The shopping mall in Taipei 101.

All content from Kiddle encyclopedia articles (including the article images and facts) can be freely used under Attribution-ShareAlike license, unless stated otherwise. Cite this article:
Taipei 101 Facts for Kids. Kiddle Encyclopedia.