E=mc2, also called the mass-energy equivalence, is one of the things that Albert Einstein is most famous for. It is a famous equation in physics and math that shows what happens when mass changes to energy or energy changes to mass. The "E" in the equation stands for energy. Energy is a number which you give to objects depending on how much they can change other things. For instance, a brick hanging over an egg can put enough energy onto the egg to break it. A feather hanging over an egg does not have enough energy to hurt the egg. 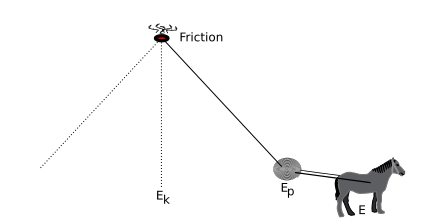 A cannonball hangs on a rope from an iron ring. A horse pulls the cannonball to the right side. When the cannonball is released it will move back and forth as diagrammed. It would do that forever except that the movement of the rope in the ring and rubbing in other places causes friction, and the friction takes away a little energy all the time. If we ignore the losses due to friction, then the energy provided by the horse is given to the cannonball as potential energy. (It has energy because it is up high and can fall down.) As the cannonball swings down it gains more and more speed, so the nearer the bottom it gets the faster it is going and the harder it would hit you if you stood in front of it. Then it slows down as its kinetic energy is changed back into potential energy. "Kinetic energy" just means the energy something has because it is moving. "Potential energy" just means the energy something has because it is in some higher position than something else.

When energy moves from one form to another, the amount of energy always remains the same. It cannot be made or destroyed. This rule is called the "conservation law of energy". For example, when you throw a ball, the energy is transferred from your hand to the ball as you release it. But the energy that was in your hand, and now the energy that is in the ball, is the same number. For a long time, people thought that the conservation of energy was all there was to talk about. 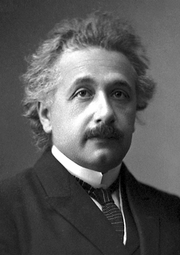 A picture of Einstein after winning his Nobel Prize, 1921

The "m" in Einstein's equation stands for mass. Mass is the amount of matter there is in some body. If you knew the number of protons and neutrons in a piece of matter such as a brick, then you could calculate its total mass as the sum of the masses of all the protons and of all the neutrons. (Electrons are so small that they are almost negligible.) Masses pull on each other, and a very large mass such as that of the Earth pulls very hard on things nearby. You would weigh much more on Jupiter than on Earth because Jupiter is so huge. You would weigh much less on the Moon because it is only about one-sixth the mass of Earth. Weight is related to the mass of the brick (or the person) and the mass of whatever is pulling it down on a spring scale – which may be smaller than the smallest moon in the solar system or larger than the Sun. 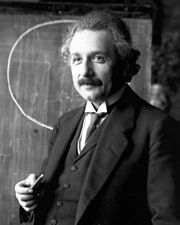 Energy can also be transformed into mass. If you were pushing a baby buggy at a slow walk and found it easy to push, but pushed it at a fast walk and found it harder to move, then you would wonder what was wrong with the baby buggy. Then if you tried to run and found that moving the buggy at any faster speed was like pushing against a brick wall, you would be very surprised. The truth is that when something is moved then its mass is increased. Human beings ordinarily do not notice this increase in mass because at the speed humans ordinarily move the increase in mass in almost nothing.

As speeds get closer to the speed of light, then the changes in mass become impossible not to notice. The basic experience we all share in daily life is that the harder we push something like a car the faster we can get it going. But when something we are pushing is already going at some large part of the speed of light we find that it keeps gaining mass, so it gets harder and harder to get it going faster. It is impossible to make any mass go at the speed of light because to do so would take infinite energy.

Sometimes a mass will change to energy. Common examples of elements that make these changes we call radioactivity are radium and uranium. An atom of uranium can lose an alpha particle (the atomic nucleus of helium) and become a new element with a lighter nucleus. Then that atom will emit two electrons, but it will not be stable yet. It will emit a series of alpha particles and electrons until it finally becomes the element Pb or what we call lead. By throwing out all these particles that have mass it has made its own mass smaller. It has also produced energy.

For example, such huge energy was released by Little Boy (the atomic bomb that exploded over Hiroshima). Just about two-thirds of a gram of the radioactive mass in that atomic bomb was lost (changed into energy), when the uranium changed into krypton and barium.

All content from Kiddle encyclopedia articles (including the article images and facts) can be freely used under Attribution-ShareAlike license, unless stated otherwise. Cite this article:
Mass-energy equivalence Facts for Kids. Kiddle Encyclopedia.