Many everyday mechanisms that utilize friction include car brakes, suitcases, and shoes. Even a person sliding across the floor uses a form of friction.

Some facts about friction are: 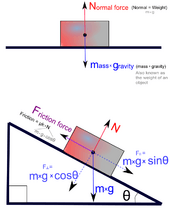 All content from Kiddle encyclopedia articles (including the article images and facts) can be freely used under Attribution-ShareAlike license, unless stated otherwise. Cite this article:
Friction Facts for Kids. Kiddle Encyclopedia.