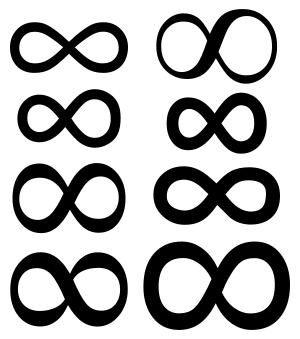 The infinity symbol in different typefaces

Infinity is about things which never end. Sometimes, it is also written

. Infinity means many different things, depending on when it is used. The word is from a Latin word, which means "without end". Infinity goes on forever, so sometimes space, numbers, and other things are said to be 'infinite', because they never come to a stop.

Infinity is not really an ordinary number, but it is sometimes used as one. Infinity often says how many there is of something, instead of how big something is. For example, there are infinitely many whole numbers (called integers), but there is no integer which is infinitely big. But different kinds of math have different kinds of infinity. So its meaning often changes.

. The number of mathematical functions is the next infinite cardinal number,

. And these numbers go on without end.

The real line and complex plane

The third type of infinity has the symbol

. This is treated as addition to the real numbers or the complex numbers. It is the result of division by zero, or to indicate that a series is increasing (or decreasing) without bound. The series 1, 2, 3, ... increases without upper bound. This is written: the limit is

. In calculus, the integral over all real numbers is written:

The arithmetic of infinity

Each kind of infinity has different rules.

Addition with "alephs" is commutative.

Multiplication with "alephs" is commutative.

. Addition with "omegas" is not commutative.

. Multiplication with "omegas" is not commutative.

All content from Kiddle encyclopedia articles (including the article images and facts) can be freely used under Attribution-ShareAlike license, unless stated otherwise. Cite this article:
Infinity Facts for Kids. Kiddle Encyclopedia.