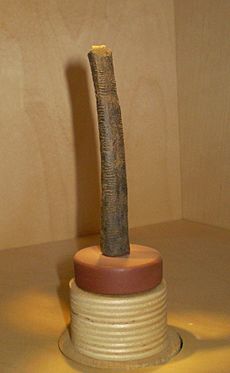 The Ishango bone (on exhibition at the Royal Belgian Institute of Natural Sciences) is believed to have been used 20,000 years ago for natural number arithmetic.

The following types of number are not natural numbers:

How to write it

All content from Kiddle encyclopedia articles (including the article images and facts) can be freely used under Attribution-ShareAlike license, unless stated otherwise. Cite this article:
Natural number Facts for Kids. Kiddle Encyclopedia.