Construction of a regular pentagon using straightedge and compass

, defined as a number that will be -1 when squared ("squared" means "multiplied by itself"). All the other imaginary numbers are

multiplied by a real number, in the same way that all real numbers can be thought of as 1 multiplied by another number. Arithmetic functions such as, addition, subtraction, multiplication, and division can be used with complex numbers. They also follow commutative, associative and distributive properties, just like real numbers.

Complex numbers were invented to answer special equations that have exponents in them. These began to pose real problems for mathematicians. As a comparison, using negative numbers, it is possible to find the x in the equation

for all real values of a and b.

The first mathematicians to have thought of this were probably Gerolamo Cardano and Raffaele Bombelli. They lived in the 16th century. It was probably Leonhard Euler who introduced writing

All complex numbers can be written as

), where a is called the real part of the number (

), and b is called the imaginary part (

The set of all complex numbers is usually written as

The rule addition of complex numbers is pretty simple: let

. Multiplication is a bit different:

Another notable operation for complex numbers is conjugation. A complex conjugate

. It is pretty simple, but is important for calculations, because

belongs to the real numbers for all complex

Other forms of describing complex numbers

Complex numbers can be shown on a so-called complex plane. If you have a number

, you can go to a point on the real axis and to b on the imaginary and draw a vector from

. You can calculate the length of this vector using the Pythagorean theorem and angle between the real axis and this vector, counting counterclockwise. The length of a vector for a number

), and the angle is argument ( 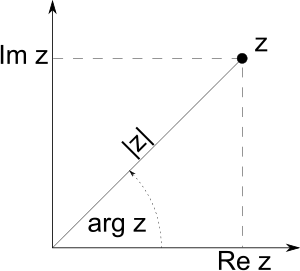 A complex number can be visually shown as two numbers which form a vector on an Argand diagram, representing the complex plane.

This leads to the trigonometrical form of describing complex numbers: by the definitions of sine and cosine, for all

This is closely connected to De Moivre's formula.

There exists even another form, called exponential.

All content from Kiddle encyclopedia articles (including the article images and facts) can be freely used under Attribution-ShareAlike license, unless stated otherwise. Cite this article:
Complex number Facts for Kids. Kiddle Encyclopedia.