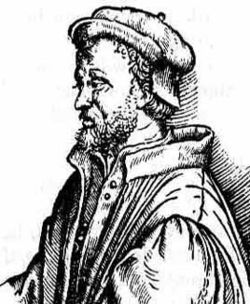 As he was an illegitimate child, he could not enter the college of physicians. Despite this he was a relatively successful physician. The first description of Typhoid fever is attributed to him.

Today he is mainly known as a mathematician. He made some discoveries in algebra. He proposed ways to solve cubic and quartic equations. Niccolò Fontana Tartaglia told him about the solution of one particular cubic equation,

Cardano was often short of money, and gambled compulsively. A book of his, Liber de ludo aleae (Book on Games of Chance in the English), contains the first systematic treatment of probability, as well as a section on cheating. He wrote it c. 1564, but it was first published posthumously, in 1663.

He invented various things, including the Cardan grille [en] and the Baguenaudier. He also believed that perpetual motion was impossible, except for stars.

All content from Kiddle encyclopedia articles (including the article images and facts) can be freely used under Attribution-ShareAlike license, unless stated otherwise. Cite this article:
Gerolamo Cardano Facts for Kids. Kiddle Encyclopedia.