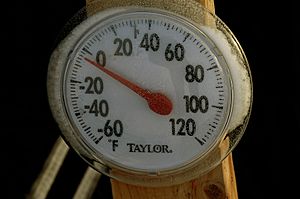 This thermometer is indicating a negative Fahrenheit temperature (−4°F).

A negative number is always less than zero.

Sometimes, for emphasis, we write the pair of opposite numbers as −3 and +3.

When a person or company is in debt, people sometimes say they have a negative amount of money. Negative numbers are used in accounting and science.

All content from Kiddle encyclopedia articles (including the article images and facts) can be freely used under Attribution-ShareAlike license, unless stated otherwise. Cite this article:
Negative number Facts for Kids. Kiddle Encyclopedia.