Sometimes referred to as the Princeps mathematicorum (Latin, "the foremost of mathematicians") and "greatest mathematician since antiquity", Gauss had an exceptional influence in many fields of mathematics and science and is ranked as one of history's most influential mathematicians.

Statue of Gauss at his birthplace, Brunswick

Johann Carl Friedrich Gauss was born on 30 April 1777 in Brunswick (Braunschweig), in the Duchy of Brunswick-Wolfenbüttel (now part of Lower Saxony, Germany), as the son of poor working-class parents.

Gauss was a child prodigy.

There are several stories of his early genius. According to one, his gifts became very apparent at the age of three when he corrected, mentally and without fault in his calculations, an error his father had made on paper while calculating finances.

Another story has it that in primary school after the young Gauss misbehaved, his teacher, J.G. Büttner, gave him a task: add a list of integers in arithmetic progression; as the story is most often told, these were the numbers from 1 to 100. The young Gauss reputedly produced the correct answer within seconds, to the astonishment of his teacher.

The year 1796 was most productive for both Gauss and number theory. He discovered a construction of the heptadecagon on 30 March. He further advanced modular arithmetic, greatly simplifying manipulations in number theory. On 8 April he became the first to prove the quadratic reciprocity law. This remarkably general law allows mathematicians to determine the solvability of any quadratic equation in modular arithmetic. The prime number theorem, conjectured on 31 May, gives a good understanding of how the prime numbers are distributed among the integers.

Gauss also discovered that every positive integer is representable as a sum of at most three triangular numbers on 10 July and then jotted down in his diary the note: "ΕΥΡΗΚΑ! num = Δ + Δ' + Δ". On 1 October he published a result on the number of solutions of polynomials with coefficients in finite fields, which 150 years later led to the Weil conjectures. 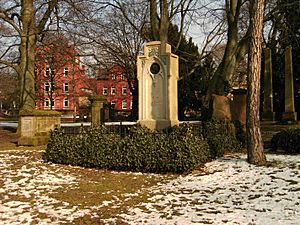 Grave of Gauss at Albani Cemetery in Göttingen, Germany.

Gauss died in Göttingen, (then Kingdom of Hanover and now Lower Saxony) on 23 February 1855 and is interred in the Albani Cemetery there. Two individuals gave eulogies at his funeral: Gauss's son-in-law Heinrich Ewald and Wolfgang Sartorius von Waltershausen, who was Gauss's close friend and biographer. His brain was preserved and was studied by Rudolf Wagner who found its mass to be 1,492 grams (slightly above average) and the cerebral area equal to 219,588 square millimeters (340.362 square inches). Highly developed convolutions were also found, which in the early 20th century were suggested as the explanation of his genius. 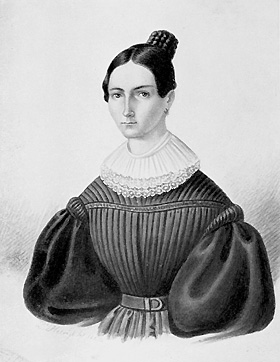 Carl Gauss was an ardent perfectionist and a hard worker. He was never a prolific writer, refusing to publish work which he did not consider complete and above criticism.

Gauss supported the monarchy and opposed Napoleon, whom he saw as an outgrowth of revolution. 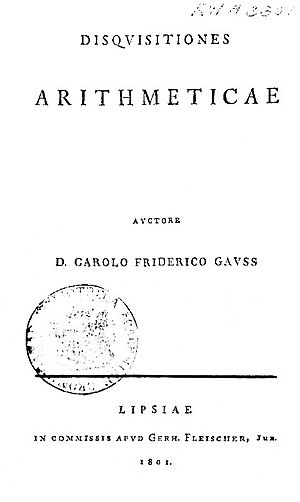 In his 1799 Gauss proved the fundamental theorem of algebra which states that every non-constant single-variable polynomial with complex coefficients has at least one complex root. 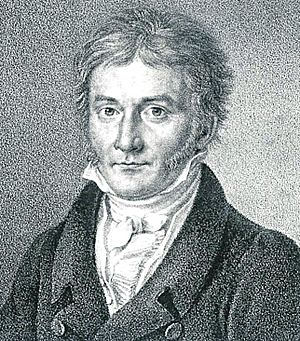 When Gauss was 23, scientists spotted the asteroid Ceres but they did not see it for long enough to know its orbit. Gauss made calculations that let them locate it. 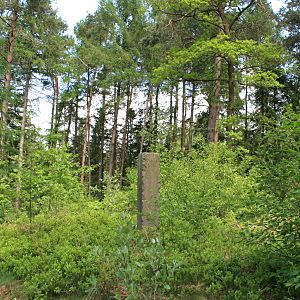 In 1818 Gauss, putting his calculation skills to practical use, carried out a geodetic survey of the Kingdom of Hanover, linking up with previous Danish surveys. To aid the survey, Gauss invented the heliotrope, an instrument that uses a mirror to reflect sunlight over great distances, to measure positions. 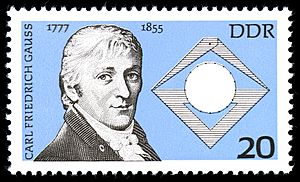 Gauss (aged about 26) on East German stamp produced in 1977. Next to him: heptadecagon, compass and straightedge.

From 1989 through 2001, Gauss's portrait, a normal distribution curve and some prominent Göttingen buildings were featured on the German ten-mark banknote. The reverse featured the approach for Hanover. Germany has also issued three postage stamps honoring Gauss. One (no. 725) appeared in 1955 on the hundredth anniversary of his death; two others, nos. 1246 and 1811, in 1977, the 200th anniversary of his birth.

Daniel Kehlmann's 2005 novel Die Vermessung der Welt, translated into English as Measuring the World (2006), explores Gauss's life and work through a lens of historical fiction, contrasting them with those of the German explorer Alexander von Humboldt. A film version directed by Detlev Buck was released in 2012.

In 2007 a bust of Gauss was placed in the Walhalla temple.

Things named in honor of Gauss include:

In 1929 the Polish mathematician Marian Rejewski, who helped to solve the German Enigma cipher machine in December 1932, began studying actuarial statistics at Göttingen. At the request of his Poznań University professor, Zdzisław Krygowski, on arriving at Göttingen Rejewski laid flowers on Gauss's grave.

All content from Kiddle encyclopedia articles (including the article images and facts) can be freely used under Attribution-ShareAlike license, unless stated otherwise. Cite this article:
Carl Friedrich Gauss Facts for Kids. Kiddle Encyclopedia.