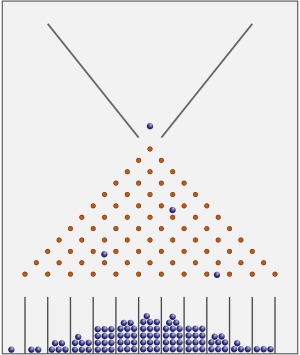 In a bean machine or Galton box most balls end up close to the center. In the long run, they will show a normal distribution

Probability is a part of applied mathematics. It has to do with chance, the study of things that might happen or might not happen.

The probability (p) of an event E, written

, is always between zero (impossible) and one (certain).

People like Jacob Bernoulli, Pierre-Simon Laplace, or Christiaan Huygens used the word probability, as described above. Other people thought about frequencies; the notion of probability is usually called frequency probability.

All content from Kiddle encyclopedia articles (including the article images and facts) can be freely used under Attribution-ShareAlike license, unless stated otherwise. Cite this article:
Probability Facts for Kids. Kiddle Encyclopedia.