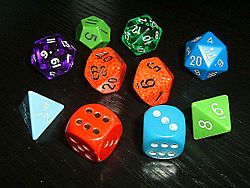 Dice are objects used in games when something random needs to be done, such as moving a game piece a random number of places on a board. Most dice are cubes that have the numbers 1, 2, 3, 4, 5 and 6 on the faces. Dice are sometimes made in other polyhedral shapes than cubes, but the six-sided die (die is the singular of "dice") is the most common. A die is usually rolled by the player’s hand. When adding together opposite sides of typical cubical dice, the sum is always 7.

Some games are played with two or more dice and some use only one. Some games that use dice are Monopoly, Yahtzee, Risk, and many more. Dice with different numbers of sides, like those used in Dungeons & Dragons, are called polyhedral dice.

Weights can be put inside a die to make it only land on a certain number once it is rolled.

All content from Kiddle encyclopedia articles (including the article images and facts) can be freely used under Attribution-ShareAlike license, unless stated otherwise. Cite this article:
Dice Facts for Kids. Kiddle Encyclopedia.