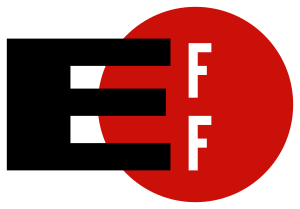 Logo of the Electronic Frontier Foundation

The Electronic Frontier Foundation (EFF) is an international non-profit based in San Francisco, United States. It was started in July 1990 by John Gilmore, John Perry Barlow and Mitch Kapor to promote Internet freedoms.

One of the first high profile cases of the EFF was Steve Jackson Games, Inc. v. United States Secret Service. In early 1990, Steve Jackson Games was under a massive search and seizure operation. Copies of the game GURPS Cyberpunk was considered as proof by mistake. Emails were also modified and were a new technology at the time. It was not considered to be protected by the right to personal privacy at the time.

Bernstein v. United States was the second large case of the EFF. Programmer Daniel J. Bernstein had sued the US Government for permission to release his cryptographic software against limits put by the government.

During the mid-1990s, the United States Government did not allow for international use of any cryptographic product unless the ciphertext could be decrypted by a third-party with a promise that the government could not read messages protected by the Data Encryption Standard (DES) even after it was shown as weak and broken. The EFF had made a piece of hardware called the EFF DES Cracker that could crack a message within 24 hours.

The plans and source code were made public.

All content from Kiddle encyclopedia articles (including the article images and facts) can be freely used under Attribution-ShareAlike license, unless stated otherwise. Cite this article:
Electronic Frontier Foundation Facts for Kids. Kiddle Encyclopedia.