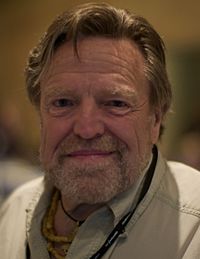 John Perry Barlow (October 3, 1947 – February 7, 2018) was an American poet and essayist, a rcattle rancher, and a cyberlibertarian political activist. He was born in Cora, Wyoming.

Barlow had been associated with both the Democratic and Republican parties. He was also a former lyricist for the Grateful Dead and a founding member of the Electronic Frontier Foundation and Freedom of the Press Foundation. He was Fellow Emeritus at Harvard University's Berkman Center for Internet and Society, where he had maintained an affiliation since 1998.

Barlow died at his home in San Francisco, California on February 7, 2018 of complications from a heart attack at the age of 70.

All content from Kiddle encyclopedia articles (including the article images and facts) can be freely used under Attribution-ShareAlike license, unless stated otherwise. Cite this article:
John Perry Barlow Facts for Kids. Kiddle Encyclopedia.