Julian Paul Assange (born Hawkins; 3 July 1971) is an Australian computer programmer and the editor of WikiLeaks. Assange founded WikiLeaks in 2006, but came to international attention in 2010, when WikiLeaks published a series of leaks provided by Chelsea Manning. These leaks included the Collateral Murder video (April 2010), the Afghanistan war logs (July 2010), the Iraq war logs (October 2010), and CableGate (November 2010). Following the 2010 leaks, the federal government of the United States launched a criminal investigation into WikiLeaks and asked allied nations for assistance.

Assange expressed concern that he would be extradited from Sweden to the United States because of his perceived role in publishing secret American documents. Assange surrendered himself to UK police on 7 December 2010, and was held for ten days before being released on bail. Having been unsuccessful in his challenge to the extradition proceedings, he breached his bail and absconded. In January 2018, he was granted Ecuadorian citizenship.

On 11 April 2019, Assange's asylum was withdrawn following a series of disputes with the Ecuadorian authorities. The police were invited into the embassy, and he was arrested. Later that day, he was found guilty of breaching the Bail Act and on 1 May 2019 he was sentenced to 50 weeks in prison in the United Kingdom. On the same day, the United States government unsealed an indictment against Assange for alleged computer intrusion, related to the leaks provided by Chelsea Manning. On 23 May 2019, the United States government further charged Assange with violating the Espionage Act of 1917. Editors from newspapers including The Washington Post and The New York Times criticised the government's decision to charge Assange under the Espionage Act.

After having been dropped in 2017, Swedish prosecutors reopened their investigation in May 2019, but in November closed it again, saying that the evidence had weakened over time. 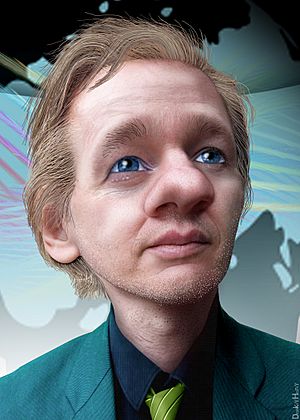 Julian Paul Hawkins was born on 3 July 1971 in Townsville, Queensland, to Christine Ann Hawkins (b. 1951), a visual artist, and John Shipton, an anti-war activist and builder. The couple had separated prior to his birth. When Julian Hawkins was a year old, his mother married Richard Brett Assange, an actor, with whom she ran a small theatre company and whom Assange regards as his father (choosing Assange as his surname). His mother had a house in Nelly Bay on Magnetic Island where they lived from time to time until it was destroyed by fire.

Assange had a nomadic childhood, and had lived in over thirty Australian towns by the time he reached his mid-teens, when he settled with his mother and half-brother in Melbourne, Victoria.

He attended many schools, including Goolmangar Primary School in New South Wales (1979–1983) and Townsville State High School, as well as being schooled at home. He studied programming, mathematics, and physics at Central Queensland University (1994) and the University of Melbourne (2003–2006), but did not complete a degree. 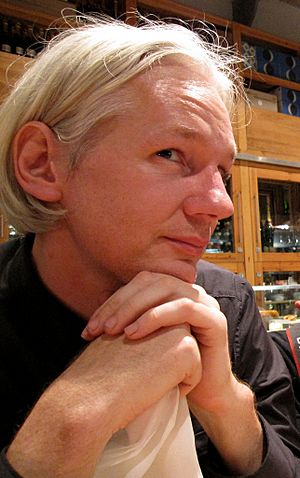 In 1987, Assange began hacking under the name Mendax. He and two others—known as "Trax" and "Prime Suspect"—formed a hacking group they called the International Subversives. During this time, he hacked into the Pentagon and other U.S. Department of Defense facilities, MILNET, the U.S. Navy, NASA, and Australia's Overseas Telecommunications Commission; Citibank, Lockheed Martin, Motorola, Panasonic, and Xerox; and the Australian National University, La Trobe University, and Stanford University's SRI International.

In September 1991, Assange was discovered hacking into the Melbourne master terminal of Nortel, a Canadian multinational telecommunications corporation. The Australian Federal Police tapped Assange's phone line (he was using a modem), raided his home at the end of October, and eventually charged him in 1994 with thirty-one counts of hacking and related crimes. In December 1996, he pleaded guilty to twenty-five charges (the other six were dropped), was ordered to pay reparations of A$2,100 and released on a good behaviour bond, avoiding a heavier penalty resulting from the perceived absence of malicious or mercenary intent and his disrupted childhood.

In 1993, Assange gave technical advice to the Victoria Police Child Exploitation Unit and assisted with prosecutions. In the same year, he was involved in starting one of the first public Internet service providers in Australia, Suburbia Public Access Network. He began programming in 1994, in 1998, he co-founded the company Earthmen Technology. Assange stated that he registered the domain leaks.org in 1999, but "didn't do anything with it." He did, however, publicise a patent granted to the National Security Agency in August 1999, for voice-data harvesting technology. 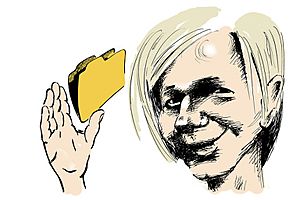 After his period of study at the University of Melbourne, Assange and others established WikiLeaks in 2006. Assange is a member of the organisation's advisory board and describes himself as the editor-in-chief. From 2007 to 2010, Assange travelled continuously on WikiLeaks business, visiting Africa, Asia, Europe and North America.

WikiLeaks published secret information, news leaks, and classified media from anonymous sources. By 2015, WikiLeaks had published more than 10 million document. The published material between 2006 and 2009 attracted various degrees of publicity, but it was only after it began publishing documents supplied by Chelsea Manning, that WikiLeaks became a household name.

Opinions of Assange at this time were divided. Australian Prime Minister Julia Gillard described his activities as "illegal," but the police said that he had broken no Australian law. United States Vice President Joe Biden and others called him a "terrorist". Some called for his assassination or execution. 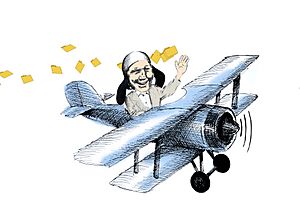 He won the Sydney Peace Foundation Gold Medal for Peace with Justice, previously awarded to only three people—Nelson Mandela, the Dalai Lama, and Buddhist spiritual leader Daisaku Ikeda. Two weeks later, he filed for the trademark "Julian Assange" in Europe, which was to be used for "Public speaking services; news reporter services; journalism; publication of texts other than publicity texts; education services; entertainment services."

For several years he was a member of the Australian journalists' union and still an honorary member, he was awarded the Martha Gellhorn Prize for Journalism and the Walkley Award for Most Outstanding Contribution to Journalism in November, having earlier won the Amnesty International UK Media Award (New Media) in 2009. 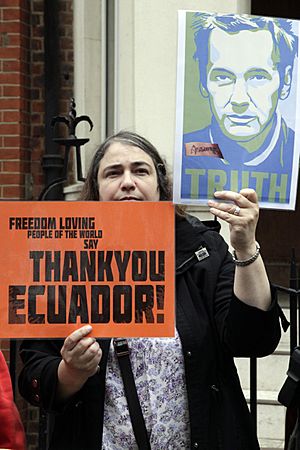 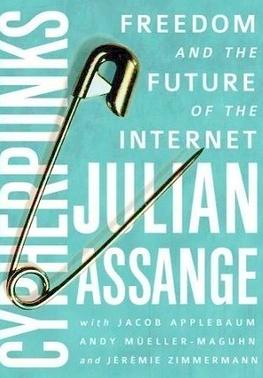 Cypherpunks: Freedom and the Future of the Internet 2012

All content from Kiddle encyclopedia articles (including the article images and facts) can be freely used under Attribution-ShareAlike license, unless stated otherwise. Cite this article:
Julian Assange Facts for Kids. Kiddle Encyclopedia.