Chelsea Elizabeth Manning, (born Bradley Edward Manning; December 17, 1987) is a United States Army soldier who was diagnosed with gender identity disorder while in the Army. After Adrian Lamo exposed Manning leaking secret government files to WikiLeaks in 2011, readers of The Guardian chose her as 2012's person of the year.

On January 11, 2018, Manning announced her plans to run for the U.S. Senate in Maryland. To challenge the state's senior senator, two-term incumbent Ben Cardin, as a Democrat in the June 26, 2018 primary election.

Manning was born in Crescent, Oklahoma. 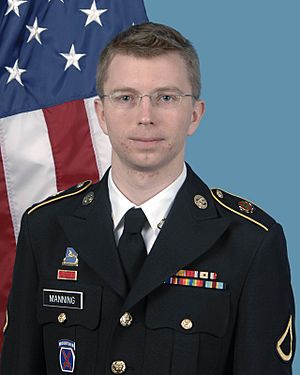 All content from Kiddle encyclopedia articles (including the article images and facts) can be freely used under Attribution-ShareAlike license, unless stated otherwise. Cite this article:
Chelsea Manning Facts for Kids. Kiddle Encyclopedia.