Fort Leonard Wood is a U.S. Army training installation located in the Missouri Ozarks. The main gate is located on the southern boundary of The City of St. Robert. The post was created in December 1940 and named in honor of General Leonard Wood (former Chief of Staff) in January 1941. Originally intended to train infantry troops, in 1941 it became an engineer training post with the creation of the Engineer Replacement Training Center. During World War II Italian and German POWs were interned at the fort. In 1984, as part of the Base Realignment and Closure process, most of the U.S. Army Engineer School's operations were consolidated at Fort Leonard Wood. Before that, officer training was conducted at Fort Belvoir, Virginia.

In 1999, again as part of the Base Realignment and Closure process, Fort McClellan, Alabama, was closed, and the U.S. Army Chemical Corps and Military Police Corps schools were transferred to Fort Leonard Wood, which was concurrently redesignated the U.S. Army Maneuver Support Center. 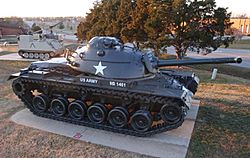 Prior to the establishment of the current Fort Leonard Wood, the name was used in 1928 to rename Camp Meade in central Maryland when it was decided that the facility, originally established as a temporary World War I cantonment, would become a permanent military post. However, after a brief time, the change of name was successfully challenged by U.S. legislators from Pennsylvania (where George G. Meade, hero of the Battle of Gettysburg, was from), and the name was changed back to Fort Meade. This left the name Leonard Wood unused. In 1939, Congress approved the purchase of a 40,000-acre tract of land near Leon, Iowa, for use as a military reservation, but did not authorize any funds to do so. During U.S. precautionary mobilization in the summer of 1940, General George C. Marshall approved the construction of a military camp capable of holding 35,000 men on the site, to be named for General Leonard Wood. U.S. Army officials went to investigate the site and found that, despite reports to the contrary after World War I, there was a critical shortage of groundwater into which wells could be sunk to produce drinking water. The corps area commander suggested an alternate site near Rolla, Missouri.

The installation has historically had a training role under TRADOC (Training and Doctrine Command) rather than a FORSCOM (Forces Command) role dating back to its origins in World War II as an engineer replacement training post. During the Gulf War, the 5th Engineer Battalion from the fort saw action in the Middle East.

After the beginning of the current wars in Iraq and Afghanistan, the 94th Engineer Battalion was restationed from Germany to Fort Leonard Wood, as were the 92nd Military Police Battalion, 193rd Brigade Support Battalion, and 94th Signal Company (part of the 4th Maneuver Enhancement Brigade). The 4th Maneuver Enhancement Brigade was activated at the fort on 2 October 2008 and was inactivated June 17, 2015.

There were 2,639 households, out of which 71.5% had children under the age of 18 living with them, 80.0% were married couples living together, 5.8% had a female householder with no husband present, and 11.5% were non-families. 7.0% of all households were made up of individuals, and none had someone living alone who was 65 years of age or older. The average household size was 3.32 and the average family size was 3.54. 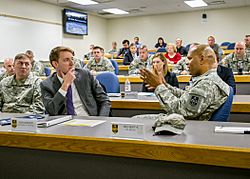 Then Missouri Secretary of State Jason Kander visits Fort Leonard Wood in November 2013. Kander previously worked there as an instructor.

Waynesville-St. Robert Regional Airport provides the community with air service. Although it is on Fort Leonard Wood, the airport is jointly run by the cities of Waynesville and St. Robert, and is available for civilian use by private pilots and scheduled commercial passenger service.

The major east-west route is

Interstate 44; before its construction, the main highway was

U.S. Route 66, which still exists as a scenic route through the area and passes through Devil's Elbow, St. Robert, Waynesville, Buckhorn, and Hazelgreen. Names for U.S. Route 66 vary – at different places, it is called Teardrop Road, Highway Z, Old Route 66, Historic Route 66, and

Route 17. State-posted signs mark most of the alignment of the road.

Major attractions along U.S. Route 66 include the Old Stagecoach Stop in downtown Waynesville, which is now a museum but began as a tavern and boarding house and is the oldest standing structure in the county. It was used as a Civil War hospital for Union troops who were garrisoned above the city in Fort Wayne, which was demolished after the war. The Old Courthouse Museum in downtown Waynesville is near the Old Stagecoach Stop. Three bridges cross the Big Piney River at Devil's Elbow—the modern Interstate 44 bridge, the later U.S. Route 66 alignment on Highway Z that was made possible by the Hooker Cut through a steep hillside, and the original U.S. Route 66 alignment on Teardrop Road that includes a historic bridge that is in the process of renovation. The Elbow Inn is a biker bar that is a frequent stop on the original U.S. Route 66 alignment.

Fort Leonard Wood also has its own post utility railway connecting to the national railway system. The rail system is operated by a contractor, Base Services, Inc., primarily carrying heavy equipment in support of the training center. Consisting of 27 miles of track, 18 of which connect the post with BNSF Railway at Bundy Junction, its operations are conducted from Monday through Friday, 0800 to 1600. The system uses two EMD GP10 locomotives numbered USA 4606 and USA 4607 and one GP40-2 numbered USA 4654. Previous motive power consisted of USA 2002 and USA 2024, EMD SW8 locomotives built in 1951 that had been used by army railway operating battalions in Korea during the war. The post also had two GE 80-ton centercab locomotives for on-post switching.

Most of the main line between the post and Bundy Junction has a grade 1.5% grade, and in some places it reaches 3%. The grade is so steep that only 20 cars can be pulled at a time up or down the mainline. The line has four sidings used for storing rail cars. At one time the line had centralized traffic control (CTC) signals, but today the signals and CTC equipment are long gone.

At one time, Fort Leonard Wood featured a busy rail operation. Not only did it receive vehicles and containers by rail, but also boxcars full of goods and equipment, coal for the base power plant, propane for various functions around post, and even diesel fuel for vehicles.

Today all that remains are half a dozen tracks with loading ramps on the ends, located in a warehouse area. In addition, there is a small staging yard next to the warehouses, an engine house and a small wye. The engine house was extended so that both locomotives can fit inside.

Fort Leonard Wood is in Pulaski County and a high percentage of military personnel live off post in surrounding communities, especially St. Robert and Waynesville but also the farther-out cities of Richland, Crocker, and Dixon, and the unincorporated communities of Laquey, Swedeborg and Devil's Elbow, all of which have a lower housing cost than nearer housing in St. Robert and Waynesville. Military personnel assigned to training areas on the south end of the post sometimes choose to live in the unincorporated areas of Big Piney and Palace in Pulaski County, or the northern Texas County communities of Plato and Roby.

KFBD-FM and its AM sister station, KJPW, are among the news providers in the Pulaski County area, which includes Fort Leonard Wood, Waynesville, and St. Robert.

KFLW Radio is owned by Ozark Media and is the only locally owned and operated radio station in Pulaski County. KFLW 98.9 The Fort is heavily involved in the local communities it serves and is known for its support of not only Fort Leonard Wood, but military service members in general.

The Daily Guide, commonly known as the Waynesville Daily Guide but based in St. Robert and serving the entire county, is owned by Gatehouse Media and is the central printing plant for three other Gatehouse newspapers in nearby counties, the daily Lake Sun, based in Camdenton, and Rolla Daily News as well as the weekly St. James Leader-Journal.

The weekly Dixon Pilot is privately owned by a resident of Dixon.

The Pulaski County Insider is run by a group of St. Robert and Waynesville residents and maintained and hosted by a Potosi resident.

The Pulaski County Web is run and maintained by a Devil's Elbow resident and former St. Robert businessman.

The cities of Waynesville and St. Robert and the Fort Leonard Wood army installation, along with their surrounding rural areas running east to Devil's Elbow, are served by the Waynesville R-VI School District which is by far the largest in the county.

The areas south of Fort Leonard Wood, including the unincorporated Pulaski County communities of Big Piney and Palace, is served by the Plato R-V School District, which is based in the northern Texas County village of Plato but also includes parts of Pulaski, Laclede and Wright Counties.

On the morning hours of 31 December 2010, an EF3 tornado had touched down near the army base's training and cantonment area (east side of the base). It caused damage to many houses, government buildings, and an old house built during the World War II era. The most damage was in the North Piney Hills Housing Area. There were only minor injuries.

All content from Kiddle encyclopedia articles (including the article images and facts) can be freely used under Attribution-ShareAlike license, unless stated otherwise. Cite this article:
Fort Leonard Wood Facts for Kids. Kiddle Encyclopedia.