The Ozarks facts for kids 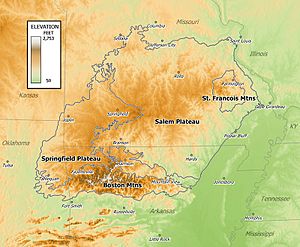 Elevation map of the Ozarks

The Ozarks (also referred to as, the Ozark Mountains or the Ozark Plateau) are a physiographic, geologic, and cultural highland region of the central United States. It covers much of the south half of Missouri and an large portion of northwest and North central Arkansas. The region also goes westward into northeast Oklahoma and extreme southeast Kansas. The name Ozarks comes from the French Aux Arcs. The name means "with bows" and was given by an early French explorer to the Bow Indians (Quapaw). They were native to the area that later became Arkansas.

All content from Kiddle encyclopedia articles (including the article images and facts) can be freely used under Attribution-ShareAlike license, unless stated otherwise. Cite this article:
The Ozarks Facts for Kids. Kiddle Encyclopedia.