Douglas County is a county located in the south-central portion of the U.S. state of Missouri. As of the 2010 census, the population was 13,684. The county seat and only incorporated community is Ava. The county was officially organized on October 19, 1857, and is named after U.S. Senator Stephen A. Douglas (D-Illinois) and later Democratic presidential candidate.

Previously, the county seat was located at Arno, west of Ava. Prior to that, Vera Cruz (formerly called Red Bud) was the county seat. Vera Cruz is located on Bryant Creek, which flows through the middle of the county. The Civil War Battle of Clark's Mill took place near Vera Cruz on November 7, 1862 and resulted in a Confederate victory. After the American Civil War, during a period of general chaos, a group from the western part of the county broke into the Arno courthouse and removed the records back to Vera Cruz. Later in 1871, a new town site was selected, present-day Ava, near the location of the former U.S. Civil War military Post Office, Militia Spring. The location of this new town seemed to satisfy most of the residents of Douglas County to be their point of county government.

According to the Association of Religion Data Archives County Membership Report (2000), Douglas County is a part of the Bible Belt with evangelical Protestantism being the majority religion. The most predominant denominations among residents in Douglas County who adhere to a religion are Southern Baptists (22.95%), Church of the Nazarene (16.28%), and Mormons (13.70%).

Established in 1950, a Trappist monastery, Assumption Abbey, can be found nestled on 3,000 acres in the Ozark hills. An associated Friary, Our Lady of the Angels, is located nearby. Both facilities have overnight rooms available to be utilized by the public for a small fee in order to find a place of solace and quiet reflection.

The county has only one incorporated town: Ava, the county seat. Also, a number of current and historic communities are present:

Of adults 25 years of age and older in Douglas County, 69.7% possess a high school diploma or higher while 9.9% hold a bachelor's degree or higher as their highest educational attainment. 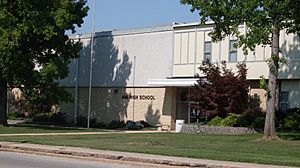 All content from Kiddle encyclopedia articles (including the article images and facts) can be freely used under Attribution-ShareAlike license, unless stated otherwise. Cite this article:
Douglas County, Missouri Facts for Kids. Kiddle Encyclopedia.