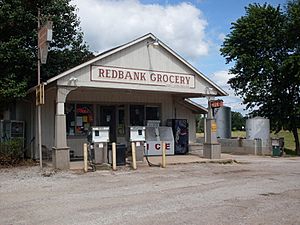 Red Bank (also spelled Redbank) is an unincorporated community in western Douglas County, Missouri. Red Bank is located on Missouri State Route O at its junction with Route NN to the west. The community of Arden is to the north and Goodhope is to the south along Route O and Merritt lies to the southwest along Route T.

A post office called Redbank was established in 1891, and remained in operation until 1898. The community was named for the red soil near the original town site.

All content from Kiddle encyclopedia articles (including the article images and facts) can be freely used under Attribution-ShareAlike license, unless stated otherwise. Cite this article:
Red Bank, Missouri Facts for Kids. Kiddle Encyclopedia.