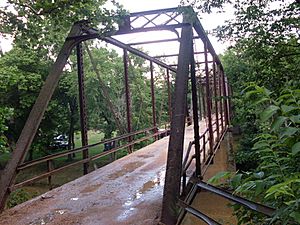 The old iron bridge over Beaver Creek at Rome was replaced in 2016.

During the American Civil War Rome was the location of Lawrence Mill. Union forces built a blockhouse to defend the location. Fort Lawrence consisted of a two story building or stockade with dimensions of 100 by 40 feet and was manned by militiamen or "Missouri home guards". Forces under the command of Confederate General Marmaduke attacked and burned the fort in January 1863 while on their way to Springfield.

Rome previously had its own post office from 1888–1957. The community was named after Rome, in Italy. 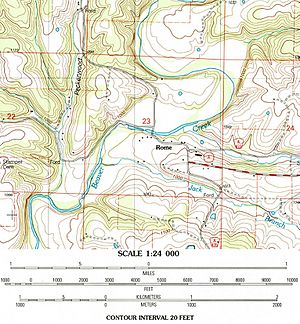 All content from Kiddle encyclopedia articles (including the article images and facts) can be freely used under Attribution-ShareAlike license, unless stated otherwise. Cite this article:
Rome, Missouri Facts for Kids. Kiddle Encyclopedia.