Ava is the only incorporated city in Douglas County, Missouri, United States. The population was 2,993 at the 2010 census. Ava is the county seat of Douglas County. The city was founded in 1871. It was renamed Ava in 1881, the town's original name having been "Militia Springs."

Ava is located in the southern portion of the Missouri Ozarks within the southern escarpment of the Salem Plateau. The lakes of the White River basin of northern Arkansas and southern Missouri lie to the south. The town is at the intersection of Missouri highways 5, 14 and 76. Mansfield is 13 miles to the north and Gainesville is about 30 miles south. Elevation of the town varies from 1,150 to 1,400 feet (350 to 430 m).

According to the United States Census Bureau, the city has a total area of 3.30 square miles (8.55 km2), all of it land. 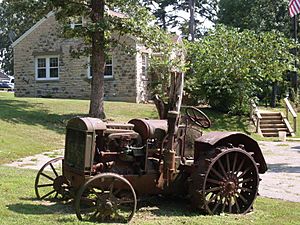 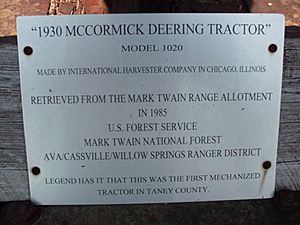 Plaque attached to the old tractor at the Ava ranger station

The area was settled during the 1830s and Douglas County was incorporated in 1857 with Vera Cruz as county seat. In 1864 the town of Militia Springs was founded and became the new county seat in 1870. The town was platted in 1871 and renamed Ava in 1881 although not incorporated until 1908. Militia Springs was the location of an encampment of Union soldiers or Missouri Militia during the American Civil War.

During and following the Civil War a dispute was ongoing regarding the county seat between Vera Cruz to the east and Arno to the west. In 1871 the citizens of Militia Springs built a court house building and moved the records there as a compromise. However, the building was burned and then rebuilt of hand hewn timbers rather than logs and re-opened in January 1873. The court house was burned again in 1886 and replaced in 1888. The current court house on the southeast corner of the town square was constructed in 1937. 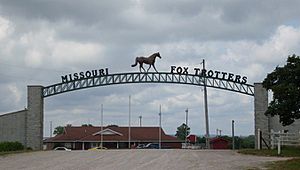 In 1910 the Kansas City, Ozark and Southern Railroad was extended from Mansfield south to Ava to service the growing agricultural and lumbering industries of Douglas County. The railroad was in operation until 1935. 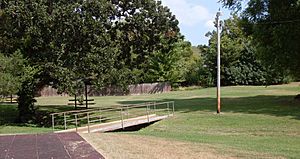 A city park, Militia Springs Park, was established in 2004 along Prairie Creek on NE 3rd Street. The location is the approximate site of the Civil War era military encampment. It has a play area and pavilion.

The Missouri Fox Trotter association was organized in Ava in 1948 and the annual shows are held at the associations property just north of Ava.

The Ava Ranger Station Historic District is listed in the National Register of Historic Places.

The town has a lending library, the Douglas County Public Library.

All content from Kiddle encyclopedia articles (including the article images and facts) can be freely used under Attribution-ShareAlike license, unless stated otherwise. Cite this article:
Ava, Missouri Facts for Kids. Kiddle Encyclopedia.