Vera Cruz is an unincorporated community in central Douglas County, Missouri. It is located on Bryant Creek about 9 miles (14 km) east of Ava at the end of Route AB. 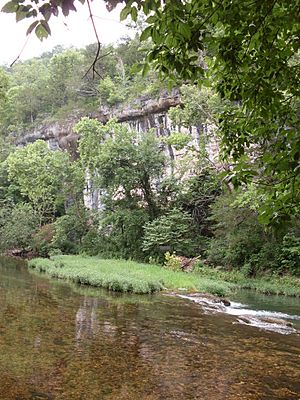 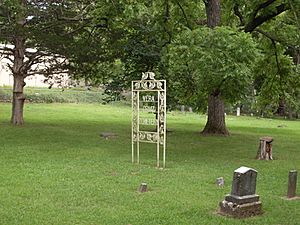 The cemetery in Vera Cruz, Missouri

Vera Cruz was established in the 1840s and named for Vera Cruz in Mexico. The village was originally called Red Bud and was at the junction of the Rockbridge–Hartville road up Bryant valley with the Old Salt Road or Rockbridge Road which went northwest through Smallett to Springfield. The name was changed to Vera Cruz in 1859. It was the first county seat of Douglas County. In 1870 the county seat was moved to Arno and shortly after to Ava.

The Civil War battle Battle of Clark's Mill on November 7, 1862 took place at a mill on Bryant Creek about one mile north of the current location. A second battle occurred on November 3, 1864, near Wilson's Mill during which the Confederate forces were driven out of the area.

All content from Kiddle encyclopedia articles (including the article images and facts) can be freely used under Attribution-ShareAlike license, unless stated otherwise. Cite this article:
Vera Cruz, Missouri Facts for Kids. Kiddle Encyclopedia.