Rockbridge is an unincorporated community in northern Ozark County, Missouri. It is the site of an old mill on spring fed Spring Creek a tributary of Bryant Creek, which still houses the post office. It is twelve miles north of Gainesville on Missouri Route N about one and a half miles north of Route 95. The narrow valley floor is only about 650 feet wide and at an elevation of 770 feet and the Ozark ridges on either side are 200 to 250 feet higher.

The town was founded in the 19th century by pioneer families from Marion County, Kentucky, led by Captain Kim Amyx. The community was burned down during the American Civil War and rebuilt after the war. A post office called Rockbridge has been in operation since 1842. The community was named for a natural rock crossing at a nearby spring.

Rockbridge was once the county seat of a greater Ozark County, which encompassed today's Ozark and parts of Douglas and Howell counties. 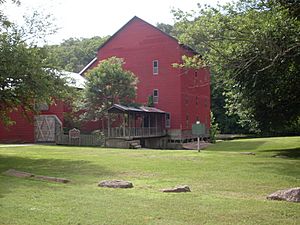 The old mill building at Rockbridge

The community is now owned by the Rainbow Trout & Game Ranch and Rockbridge Gun Club, founded in 1954, and includes a trout fish hatchery. About five miles to the northwest above the Bryant Creek floodplain in Douglas County is Assumption Abbey, a Trappist monastery.

All content from Kiddle encyclopedia articles (including the article images and facts) can be freely used under Attribution-ShareAlike license, unless stated otherwise. Cite this article:
Rockbridge, Missouri Facts for Kids. Kiddle Encyclopedia.