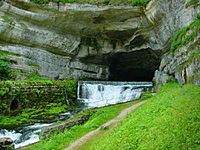 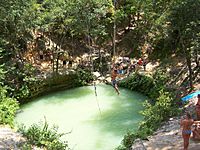 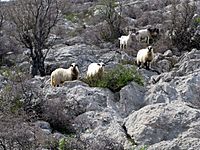 The karst limestone, after surface rock has weathered away, makes a ground surface which is almost imposssibly difficult for humans. Velebit in Croatia. 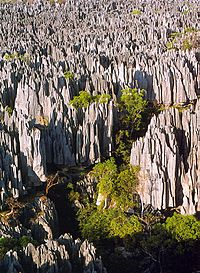 Karst is a geological system of rocks where water has eroded (dissolved) the bedrock. If it is very extensive, karst can be a geographical or topographical feature. It is classed as a badland if it difficult to travel through the environment, which it often is.

Almost always, karst is formed in carbonate rocks, such as limestone or dolomite. Since carbonate sedimentary rocks are very common, karst areas occur all over the world.

The world's largest karst area is the Nullarbor Plain, part of the area of flat, almost treeless, dry country of southern Australia. It is on the Great Australian Bight coast with the Great Victoria Desert to its north. It is the world's largest single exposure of limestone bedrock, and occupies an area of about 200,000 square kilometres (77,000 sq mi). At its widest point, it stretches about 1,100 kilometres (684 mi) from east to west across the border region between South Australia and Western Australia.

Many parts of the world suffer from sinkholes which form when karsts are underground. Beneath the flat surface of the land in Florida, Guatemala City and elsewhere are vast systems of limestone. Water running through the limestone is dissolving the limestone away, leaving huge caverns. Without warning, huge holes appear in the surface, causing great damage. Practically the whole of Florida is sitting on a gigantic karst system, as are several countries in Central America. The area round Tampa is especially at risk, and there is a huge karst system under Mexico City. According to a senior geochemist, there are as many as 15,000 sinkholes in Illinois.

The Qattara Depression in Egypt is part of the Libyan Desert. It is roughly 50 miles (80km) by 75 miles (121km) in surface area. It is the world's largest natural sinkhole. It lies below sea level and is covered with salt pans, sand dunes and salt marshes. 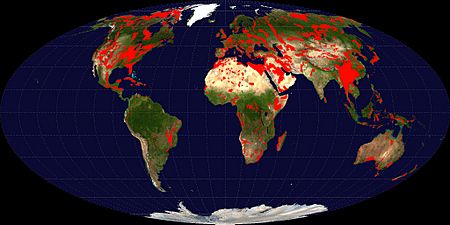 All content from Kiddle encyclopedia articles (including the article images and facts) can be freely used under Attribution-ShareAlike license, unless stated otherwise. Cite this article:
Karst Facts for Kids. Kiddle Encyclopedia.