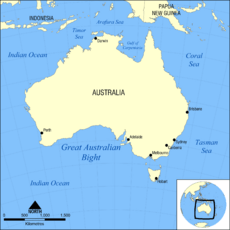 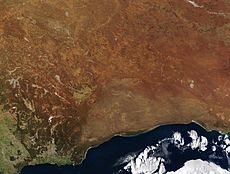 The Great Australian Bight is a large bight, or open bay. It is off the central and western parts of the southern coastline of mainland Australia.

The Bight's boundaries are from Cape Pasley, Western Australia, to Cape Carnot, South Australia. This is a distance of 1,160 km or 720 miles.

The much more accepted name in Australia for the connected waterbody is the Southern Ocean rather than the Indian Ocean.

The settlements along the coastline with access to the Bight and facilities are Ceduna and Eucla. Some other locations on the Eyre Highway or on the Nullarbor do not have facilities or easy access. 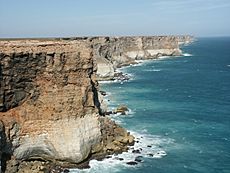 The coast line of the Great Australian Bight has cliff faces (up to 60 m high), surfing beaches and rock platforms, ideal for whale-watching. The Great Australian Bight receives very little of the runoff that fertilises most continental shelves. It is essentially a marine desert. It is probably best noted for the large number of sharks that frequent its coastal waters, as well as the increasing numbers of Southern Right Whales that migrate in the region.

One location on the bight that is for the understanding of the natural history on its coastline is the Eyre Bird Observatory.

All content from Kiddle encyclopedia articles (including the article images and facts) can be freely used under Attribution-ShareAlike license, unless stated otherwise. Cite this article:
Great Australian Bight Facts for Kids. Kiddle Encyclopedia.