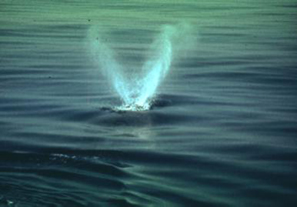 The distinctive V-shaped blow of a right whale 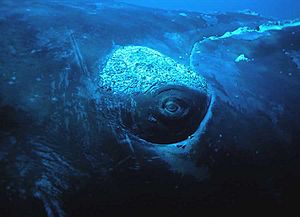 Unlike other whales, a right whale has distinctive callosities (roughened patches of skin) on its head, along with a broad back without a dorsal fin, occasionally with white belly patches, and a long, arching rostrum, or upper jaw, that begins above the eye. Right whales are similar to bowhead whales, but smaller. These whales are rich in blubber and have 2 blowholes. The eyes are very small and lips are large. Right whales were named by whalers who considered them the "right" whales to hunt, since they were rich in blubber, they were easy to catch (they are relatively slow swimmers) and they floated after being killed.

Hunters needed the right whale's blubber for meat, because blubber could be boiled to make oil. The right whale's name came from hunters, who thought that they were the "right" whales to hunt. This was because they had lots of blubber. They were also easy to catch (because they were relatively slow swimmers) and they floated on the surface of the water after being killed. Because of these things, right whales are the most endangered of the great whales.

The right whales' diets consist primarily of zooplankton, primarily the tiny crustaceans called copepods, as well as krill, and pteropods, although they are occasionally opportunistic feeders. As with other baleens, they feed by filtering prey from the water. They swim with an open mouth, filling it with water and prey. The whale then expels the water, using its baleen plates to retain the prey. Prey must occur in sufficient numbers to trigger the whale's interest, be large enough that the baleen plates can filter it, and be slow enough that it cannot escape. The "skimming" may take place on the surface, underwater, or even at the ocean's bottom, indicated by mud occasionally observed on right whales' bodies.

The right whales' two known predators are humans and orcas. When danger lurks, a group of right whales may cluster into a circle, and thrash their outwards-pointing tails. They may also head for shallow water, which sometimes proves to be an ineffective defense. Aside from the strongly-build tails and massive heads equipping with callosities, the sheer size of this animal is its best defense, although young calves are the most vulnerable to orca and shark attacks.

The three Eubalaena species inhabit three distinct areas of the globe: the North Atlantic in the western Atlantic Ocean, the North Pacific in a band from Japan to Alaska and all areas of the Southern Ocean. The whales can only cope with the moderate temperatures found between 20 and 60 degrees in latitude. The warm equatorial waters form a barrier that prevents mixing between the northern and southern groups with minor exclusions. Although the southern species in particular must travel across open ocean to reach its feeding grounds, the species is not considered to be pelagic. In general, they prefer to stay close to peninsulas and bays and on continental shelves, as these areas offer greater shelter and an abundance of their preferred foods.

Because the oceans are so large, it is very difficult to accurately gauge whale population sizes. Approximate figures:

Almost all of the 400 North Atlantic right whales live in the western North Atlantic Ocean. In northern spring, summer and autumn, they feed in areas off the Canadian and northeast U.S. coasts in a range stretching from New York to Newfoundland. Particularly popular feeding areas are the Bay of Fundy and Cape Cod Bay. In winter, they head south towards Georgia and Florida to give birth. There have been a smattering of sightings further east over the past few decades; several sightings were made close to Iceland in 2003. These are possibly the remains of a virtually extinct eastern Atlantic stock, but examination of old whalers' records suggests they are more likely to be strays. However, a few sightings are regular between Norway, Ireland, Spain, Portugal, the Canary Islands and even Italy and Sicily; at least the Norway individuals come from the Western stock.

The North Pacific right whale appears to occur in two populations. The population in the eastern North Pacific/Bering Sea is extremely low, numbering about 30 individuals. A larger western population of 100–200 appears to be surviving in the Sea of Okhotsk, but very little is known about this population. Thus, the two northern right whale species are the most endangered of all large whales and two of the most endangered animal species in the world. Based on current population density trends, both species are predicted to become extinct within 200 years. The Pacific species was historically found in summer from the Sea of Okhotsk in the west to the Gulf of Alaska in the east, generally north of 50°N. Today, sightings are very rare and generally occur in the mouth of the Sea of Okhotsk and in the eastern Bering Sea. Although this species is very likely to be migratory like the other two species, its movement patterns are not known.

The last major population review of southern right whales by the International Whaling Commission was in 1998. Researchers used data about adult female populations from three surveys (one in each of Argentina, South Africa and Australia) and extrapolated to include unsurveyed areas and estimated counts of males and calves (using available male:female and adult:calf ratios), giving an estimated 1997 population of 7,500 animals. More recent data from 2007 indicate those survey areas have shown evidence of strong recovery, with a population approaching twice that of a decade earlier. However, other breeding populations are still very small, and data are insufficient to determine whether they, too, are recovering.

The southern right whale spends the summer months in the far Southern Ocean feeding, probably close to Antarctica. It migrates north in winter for breeding, and can be seen around the coasts of Argentina, Australia, Brazil, Chile, Mozambique, New Zealand, South Africa and Uruguay. Since hunting of the southern right whale ceased, stocks are estimated to have grown by 7% a year. The South American, South African and Australasian groups apparently intermix very little, if at all, because of the strong fidelity of mothers to their feeding and calving grounds. The mother passes these instincts to her calves.

Vocalizations made by right whales are not elaborate compared to those made by other whale species. The whales make groans, pops and belches typically at frequencies around 500 Hz. The purpose of the sounds is not known but may be a form of communication between whales within the same group. Northern right whales responded to sounds similar to police sirens—sounds of much higher frequency than their own. On hearing the sounds, they moved rapidly to the surface. The research was of particular interest because northern rights ignore most sounds, including those of approaching boats. Researchers speculate this information may be useful in attempts to reduce the number of ship-whale collisions or to encourage the whales to surface for ease of harvesting.

All content from Kiddle encyclopedia articles (including the article images and facts) can be freely used under Attribution-ShareAlike license, unless stated otherwise. Cite this article:
Right whale Facts for Kids. Kiddle Encyclopedia.