Mozambique has many natural resources. Portugal, Spain, and Belgium are among the country's most important partners. It is one of the poorest countries in the world. They have the world's lowest life expectancy. In 2012, large natural gas reserves were found in Mozambique. The revenues from the reserves might dramatically change the economy.

The only official language of Mozambique is Portuguese. About half the people speak it as a second language and very few as a first language. Languages widely spoken natively include Swahili, Makhuwa, and Sena. The largest religion in Mozambique is Christianity. There are also Muslim and African traditional religious minorities.

Mozambique is a member of the African Union, Commonwealth of Nations, the Community of Portuguese Language Countries, the Latin Union, Organisation of Islamic Cooperation and Southern African Development Community.

At 309,475 sq mi (801,537 km2), Mozambique is the world's 36th-largest country. It is comparable in size to Turkey. Mozambique is located on the southeast coast of Africa. It is bound by Swaziland to the south, South Africa to the southwest, Zimbabwe to the west, Zambia and Malawi to the northwest, Tanzania to the north and the Indian Ocean to the east. Mozambique lies between latitudes 10° and 27°S, and longitudes 30° and 41°E.

The country is drained by five principal rivers and several smaller ones with the largest and most important the Zambezi. The country has four notable lakes: Lake Niassa (or Malawi), Lake Chiuta, Lake Cahora Bassa and Lake Shirwa, all in the north. The major cities are Maputo, Beira, Nampula, Tete, Quelimane, Chimoio, Pemba, Inhambane, Xai-Xai and Lichinga. 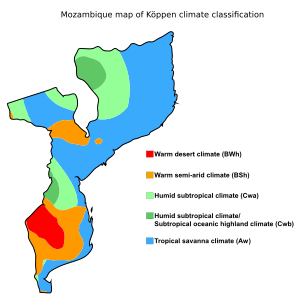 Mozambique has a tropical climate with two seasons, a wet season from October to March and a dry season from April to September. Climatic conditions, however, vary depending on altitude. Rainfall is heavy along the coast and decreases in the north and south. Annual precipitation varies from 500 to 900 mm (19.7 to 35.4 in) depending on the region, with an average of 590 mm (23.2 in). Cyclones are common during the wet season. Average temperature ranges in Maputo are from 13 to 24 °C (55.4 to 75.2 °F) in July and from 22 to 31 °C (71.6 to 87.8 °F) in February.

This is a list of cities and towns with the most people. It is based on the most recent census done for each city or town.

The entire country has about 22 million people. These 14 cities have 5 million total. This shows that most people still live in rural areas.

A panoramic view of Maputo, the capital of Mozambique and the largest city in the country. Maputo city is separate from the Maputo Province.

Mozambique is divided into ten provinces (provincias) and one capital city (cidade capital) with provincial status. The provinces are divided into 129 districts (distritos). The districts are further divided in 405 "Postos Administrativos" (Administrative Posts) and then into Localidades (Localities), the lowest geographical level of the central state administration. Since 1998, 43 "Municípios" (Municipalities) have been created in Mozambique. 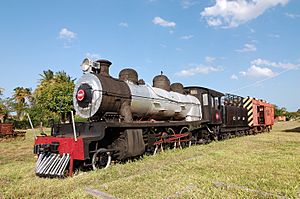 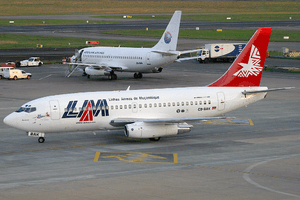 Modes of transport in Mozambique include rail, road, water, and air.

There are over 30,000 km of roads, but much of the network is unpaved. Like its Commonwealth neighbours, traffic circulates on the left.

There is an international airport at Maputo, 21 other paved airports, and over 100 airstrips with unpaved runways.

On the Indian Ocean coast are several large seaports, including Nacala, Beira and Maputo, with further ports being developed. There are 3,750 km of navigable inland waterways. There are rail links serving principal cities and connecting the country with Malawi, Zimbabwe and South Africa. The Mozambican railway system developed over more than a century from three different ports on the Indian Ocean that served as terminals for separate lines to the hinterland. The railroads were major targets during the Mozambican Civil War, were sabotaged by RENAMO, and are being rehabilitated. A parastatal authority, Portos e Caminhos de Ferro de Moçambique (abbreviated CFM; in English Mozambique Ports and Railways), oversees the railway system of Mozambique and its connected ports, but management has been largely outsourced. Each line has its own development corridor.

As of 2005[update] there were 3,123 km of railway track, consisting of 2,983 km of 1,067 mm (3 ft 6 in) gauge, compatible with neighbouring rail systems, and a 140 km line of 762 mm (2 ft 6 in) gauge, the Gaza Railway. The central Beira Railroad Corporation route links the port of Beira to the landlocked countries of Malawi, Zambia and Zimbabwe. To the north of this the port of Nacala is also linked by rail to Malawi, and to the south Maputo is linked to Zimbabwe and South Africa. These networks interconnect only via neighbouring countries. A new route for coal haulage between Tete and Beira was planned to come into service by 2010, and in August 2010, Mozambique and Botswana signed a memorandum of understanding to develop a 1,100 km railway through Zimbabwe, to carry coal from Serule in Botswana to a deepwater port at Techobanine Point in Mozambique. 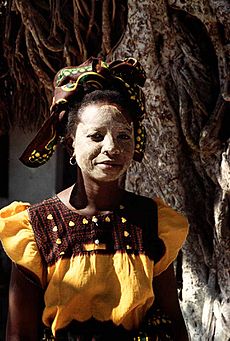 Woman with traditional mask in Mozambique

The music of Mozambique can be for many purposes. These can be religious or for traditional ceremonies. Musical instruments are usually handmade. Some of the instruments used include drums made of wood and animal skin; the lupembe, a woodwind instrument made from animal horns or wood; and the marimba, which is a kind of xylophone native to Mozambique. The marimba is a popular instrument with the Chopi of the south central coast. They are famous for their musical skill and dance.

The Makonde are renowned for their wood carving and elaborate masks that are commonly used in traditional dances. There are two different kinds of wood carvings. Shetani, (evil spirits), which are mostly carved in heavy ebony, tall, and elegantly curved with symbols and nonrepresentational faces. The Ujamaa are totem-type carvings which show lifelike faces of people and various figures. Theses sculptures are usually called “family trees” because they tell stories of many generations.

During the last years of the colonial period, Mozambican art showed the oppression by the colonial power, and became a symbol of the resistance. After independence in 1975, the modern art came into a new phase. The two best known and most influential contemporary Mozambican artists are the painter Malangatana Ngwenya and the sculptor Alberto Chissano. Art during the 1980s and 1990s shows the political struggle, civil war, suffering, starvation and struggle.

Dances are usually highly developed traditions throughout Mozambique. There are many different kinds of dances from tribe to tribe which are usually ritualistic in nature. The Chopi, for instance, act out battles dressed in animal skins. The men of Makua dress in colourful outfits and masks while dancing on stilts around the village for hours. Groups of women in the northern part of the country have a traditional dance called tufo, to celebrate Islamic holidays.

Because the Portuguese were there for nearly 500 years, they greatly impacted the cuisine of Mozambique. Crops such as cassava (a starchy root) and cashew nuts (Mozambique was once the largest producer of these nuts), and pãozinho were brought in by the Portuguese. The use of spices and seasonings such as onions, bay leaves, garlic, fresh coriander, paprika, chili peppers, red sweet peppers, and wine were introduced by the Portuguese. So was sugarcane, maize, millet, rice, sorghum (a type of grass), and potatoes. Prego (steak roll), rissois (battered shrimp), espetada (kebab), pudim (pudding), and the popular inteiro com piripiri (whole chicken in piri-piri sauce) are all Portuguese dishes commonly eaten in present-day Mozambique.

Football is the most popular sport in Mozambique.

All content from Kiddle encyclopedia articles (including the article images and facts) can be freely used under Attribution-ShareAlike license, unless stated otherwise. Cite this article:
Mozambique Facts for Kids. Kiddle Encyclopedia.